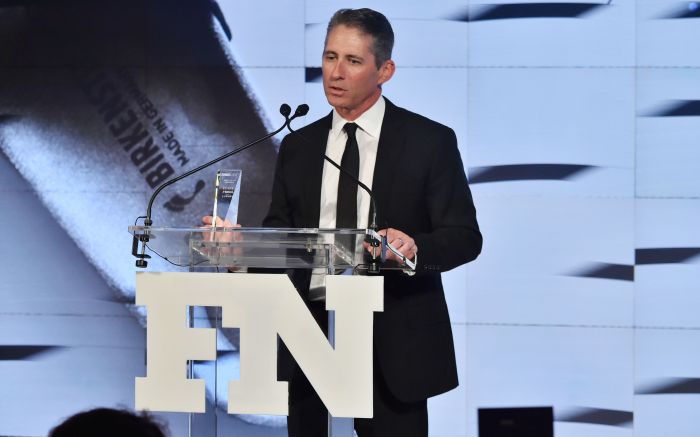 The iconic sandal label was recognized as the FNAA 2017 Brand of the Year for its popularity with everyone from celebrities to suburban moms.

“Just a short while ago, every major media outlet said [Birkenstock] was the ugliest thing they’ve ever seen,” said Kahan after receiving his award. “Talk about fake news.”

In the last year, the brand has debuted a series of concept stores at fashion weeks in Berlin and Milan, and opened its first flagship store in London.

“It is because of our loyal fanbase that we have been able to do the innovative and creative things that we did in the last year to bring us to a broader audience,” said Kahan.

Even before recent expansions, Birkenstock was recognized as the Footwear News Brand of the Year in 2013 for its widespread appeal.

“Some [of our fans] just happen to be A-list, boldface Hollywood celebrities who purchase our shoes and love wearing them when they’re not on the red carpet,” Kahan said.

Indeed, stars such as Emma Roberts, Julianne Moore and Gwyneth Paltrow have all been spotted rocking the quirky-chic sandals on the street.

“Welcome to our world,” Kahan concluded the speech by giving a shout-out to both longtime fans and those who purchased their first pair recently.

Click here to see photos from the red carpet at the 2017 FNAAs.