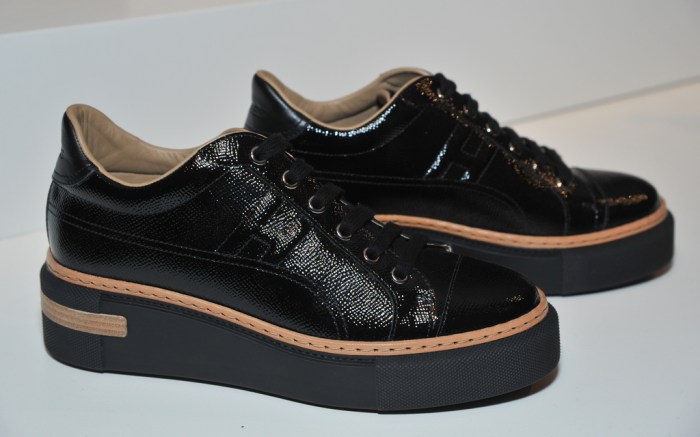 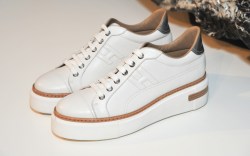 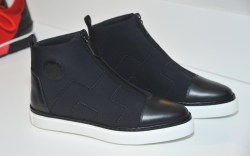 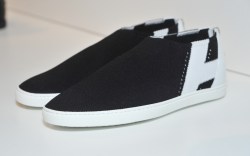 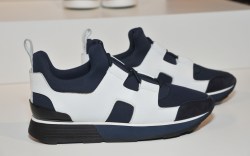 Hermès’ 2017 theme is a celebration of the object in all of its glory, and for fall, footwear director Pierre Hardy played with the objects within the house’s visual lexicon.

“I wanted to take their original meaning and turn it into something different,” he said Wednesday at the presentation in Paris.“So I took things that were utilitarian and used them for decoration and embellishment.”

Studs, more often found on harnesses and leashes, adorned riding boots and brogues. He also played with the idea of the grommet, using it both for eyelets and, in its own right, as decoration.

Loafers and sandals came with shiny cabochon details borrowed from necklaces creative director Nadège Vanhee-Cybulski designed for spring. They riffed off bracelets she found in the house’s archives.

Hardy also objectified the sole, exaggerating its thickness and prominence, as seen in brightly colored over-the-knee boots with wooden lug soles and in mules done in patent ostrich with contrast pink insoles.

Even the house’s classic carré prints underwent a transformation. A pattern called “Flamingo Party” was recolored for a platform sandal and embellished with beads of blue pearl.

As for the sneaker, these came in technical knits, a first for Hermès, while neoprene models sported leather overlays featuring a deconstructed version of that iconic “H.”

For the rest of the collection, click through the gallery.