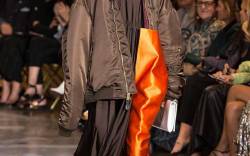 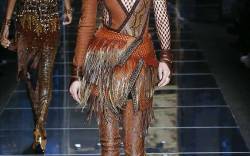 With 2017 nearly at a close, it’s time to put our best foot forward and line up the biggest trends that made it from runway to real life this year. Did you buy into any of these little beauties? If so, you certainly weren’t alone.

It was the year of the designer logo. Both Dior’s Maria Grazia Chiuri and Saint Laurent’s Anthony Vaccarello set the tone for spring, playing the name game with their debut collections. Enter Chiuri’s slingback pumps with their black and white J’Adior woven ribbon and Vaccarello’s metal monogram heels. As for Balenciaga, Demna Gvasalia both brought back the house’s vintage double B and created an entirely new branding concept as seen on those splashy logo stretch boots.

When Anthony Vaccarello’s crystal Niki boot appeared on his Saint Laurent fall ’17 runway, the fashion world saw stars, François-Henri Pinault and team Kering congratulated themselves once again on a stellar hire, and cash registers jangled to the tune of some $10,000 a pop. It wasn’t the only frosting for fall, either. Chanel’s intergalactic glitter boots were worthy contenders in the space race, and Marco de Vincenzo fans were lit when they spotted the trend on the designer’s runway in Milan.

Designers including Karl Lagerfeld at Fendi, Victoria Beckham, Malone Souliers for Roksanda Ilincic and Giambattista Valli all saw red for fall ’17 — when it came to their piping-hot boots, that is. Beckham delivered both fire engine and claret hues, Malone Souliers did slouchy versions with stripy color-block heels, Valli added spice with lace-up velvet, and Karl Lagerfeld created entire monoblock looks in the color of the season at Fendi.

ARE YOU SITTING COMFORTABLY?

This was the year that the comfort shoe went high fashion. For spring, both Uggs and Crocs — once consigned to dog-walking, gardening and holiday attire for the under-10s — had the mother of all makeovers, thanks to Preen by Thornton Bregazzi and Christopher Kane. Preen’s Uggs, with their extreme platforms and myriad bells and whistles, didn’t actually look like Uggs, though we were assured they were. But it was the Christopher Kane Crocs that won hearts and minds. For spring, the shoes came mineral-encrusted, while fall’s luxe mink trims upped the comfort game to a whole new level.

There are thigh-high boots, and then there are those that veer toward rather more intimate areas. Yes, Olivier Rousteing, we’re talking to you and your Balmain army, plus Glenn Martens for his overblown Y/Project denim styles. We are also addressing Gvasalia in his capacity as creative director at both Balenciaga and Vetements, both of which took said boot game and raised it. For Vetements, Gvasalia collaborated with Manolo Blahnik on soaring jewel-colored numbers, while he invented an entire new hybrid clothing category for Balenciaga, dubbing it the pantashoe.

Finally, while this one may not quite have entered the mainstream*, it certainly made for some eye-catching runway shots. Most prominent of course was Pheobe Philo’s Céline, but there was definitely something off-key in the spring air because Katie Hillier and Luella Bartley of Hillier Bartley got the same idea and executed it with a little help from Blahnik.

*Unless you were Net-a-Porter fashion director, Lisa Aiken. Obviously.

🏁 in sight #FashionMonth almost done for another season #PFW #FW17