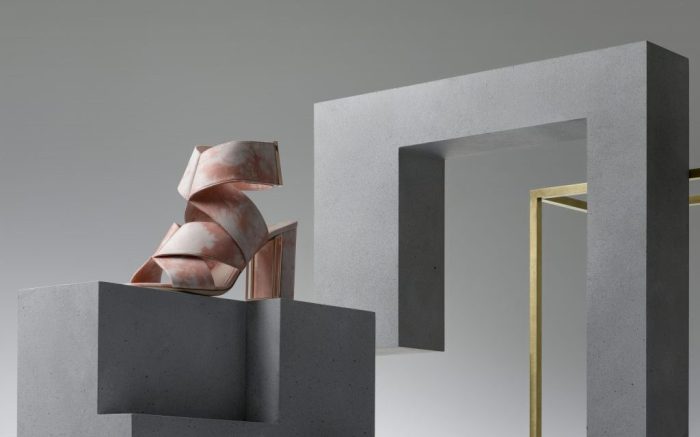 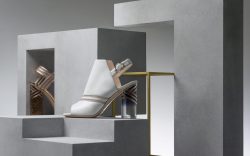 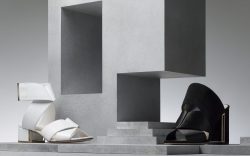 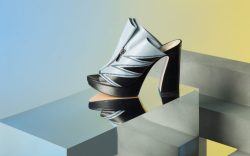 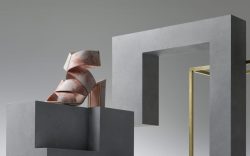 There’s a good chance you know what your favorite celebrity ate for breakfast this morning, but Nicholas Kirkwood wonders whether all this information is healthy for us.

In his Paris Fashion Week presentation today, titled “An Impression of Stolen Space,” the designer explored removing elements from a full picture and alluding to volumes that weren’t actually there.

“We have an insatiable appetite for information, whether voluntarily or involuntarily. Are we exposed to too much in today’s society?” wrote Kirkwood in his show notes. “Does too much information suppress imagination and remove an aspect of intrigue?”

The designer was inspired by the work of artist Eva Rothschild, whose sculptural works are defined by unstable geometric firms. At the same time, Rothschild references minimalism — so Kirkwood referenced early ‘90s minimalism for several of his designs. He also studied the work of Italian architect Carlo Scarpa as he was dreaming up his new designs.

Key product groups included Nini, which is named after Scarpa’s wife. A new block heel was finished with gold detailing that appears as a jewelry-like adornment. Uppers feature leather, folded over, and satin.

The Mica series features a plexi heel with cloudy detail, giving the impression of smoke being trapped inside it.

The Eva group features suede and leather uppers with heels that appear slightly slice off.

Bleached denim and nappa, raffia, metallic leathers and weaves were all key materials across the collection this season.

Kirkwood worked with filmmaker Rei Nadal for the second time to bring the concept to life through a short film. Guests at the presentation were encouraged to pick up headphones to hear the models in the film speak — but you didn’t know the questions they were asked, only the answers.

During a week of endless presentations, this one definitely stood out. The imaginative concept — woven throughout the product, event space (at Paris’ Cité De L’architecture Et Du Patrimoine) and film — made us look away from our phones and Instagram, if only for a few minutes.

Click through the gallery to see more of Kirkwood’s spring ’18 collection.