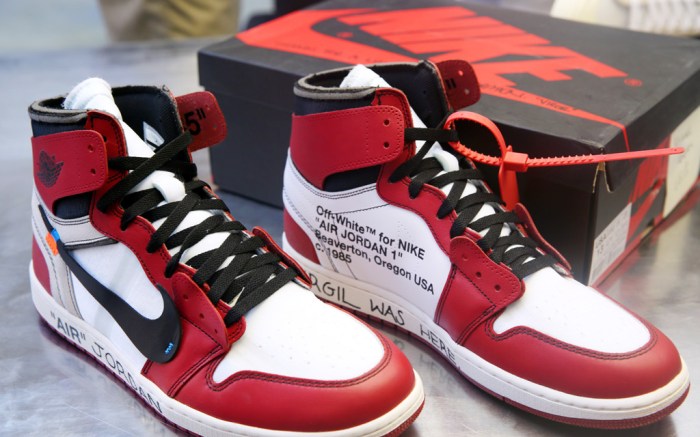 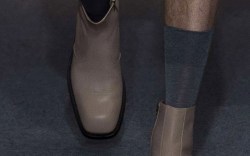 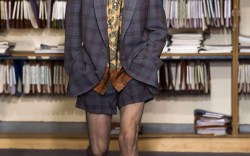 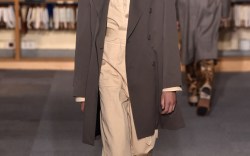 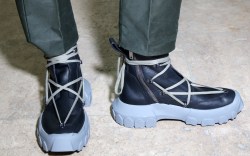 Arrr me hearties!
For Jonathan Anderson at Loewe there was a distinct seaside theme at play. Jaunty striped espadrilles came in a cotton twill and leather combo as did a pair of khaki pirate boots — just the thing for riding those high seas. However it was the needlepoint slippers that really floated our boat. Team with rolled up pants for a spot of sunset beach-combing.

Virgil Abloh’s secret signing
Off White designer Virgil Abloh has been secretly signing sneakers from that upcoming Nike collaboration. Just for his famous mates for now, we spotted Jay-Z’s name on one box, it looks like the collab includes the Nike Blazer as well as the Air Jordan and Air Force 1.

What Brexit?
Brexit notwithstanding, Sandro flew the flag for Anglo English relations. Alongside the French label’s spring ’18 collection, it also took the opportunity to debut its hero shoe for fall ’17. It’s very first is derby is handmade in England and comes in box-calf leather with complete Goodyear stitching.

Rick Owens’ driving force
The Rick Owens show was quite a production. Staged on a grand industrial style set erected in the courtyard of Paris’ even grander Palais de Tokyo, Owens’ emo army marched forth in chunky black boots with exaggerated rubber soles that looked just like car tires.

Good day at The Office dear?
Dries van Noten showed spring ’18 in a downbeat office space on the very top floor of a multi story car park. The mood of the collection channeled British sitcom “The Office” as well. Footwear came reassuringly square toed. And with dad style taking center stage thanks to Demna Gvasalia, it’s seriously hip to be square right now.

Tim Coppens goes back to school
Tim Coppens collaborated with Clarks Originals this season, showing Wallabee shoes in suede and leather with industrial style toggles. The footwear label is having a serious fashion moment. It has also just collaborated with Drake on a pair of desert boots. “They remind me of my childhood,” Coppens told Footwear News.

Team Pigalle
Pigalle collaborated with Nike for spring ‘18 teaming a sportif collection with slip-on Air Max styles and plush pool slides too. Shoelaces are over-rated. The big brands can’t get enough of designer Stephane Ashpool’s cult French label. He’s also collaborated with Missoni for fall ’17. Ashpool hijacked Paris’ Musee d’Art Moderne for the show, covered the statues in white sheets and exhibited portraits of himself and his athletic friends instead.