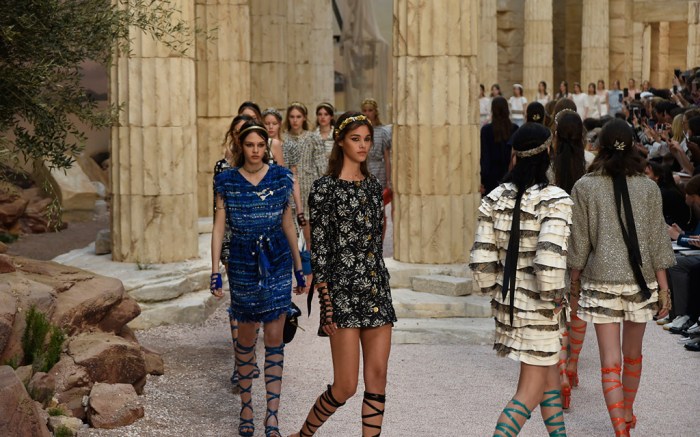 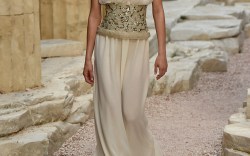 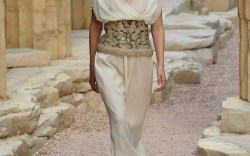 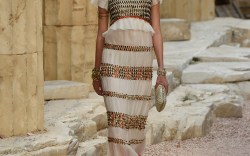 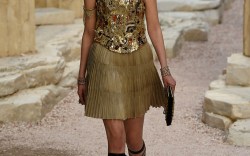 The original so-called Elgin Marbles from the Athenian Parthenon currently reside in the British Museum, thanks to Thomas Bruce, 7th Earl of Elgin. But in the age of the Instagram “regram,” what’s an original, anyway?

Fashion has an illustrious history of reinterpretation — and the Greco-Roman-inspired haute-boho look has been similarly pillaged over the years in many guises. Think festival dressing popularized by Kate Moss and Sienna Miller circa 2004, and most recently, spring 2015, with Isabel Marant, Alexander McQueen and Valentino rekindling our love affair with the gladiator sandal.

Lagerfeld stated in his show notes: “The criteria of beauty in ancient, then classical, Greece still hold true. There have never been more beautiful representations of women. Or more beautiful columns.”

The notes also revealed that the collection was an expression of a fascination harbored by the erudite Lagerfeld since childhood. “The first book I read was Homer.”

“I’m suggesting going back to move forward,” he stated. “To create the future, you have to pay attention to the past.”

When he refers to the past, Lagerfeld is also referring to the house itself. In 1922, Gabrielle Chanel designed the costumes for Jean Cocteau’s staging of the Greek play “Antigone.” Cocteau quipped at the time that she was “the greatest couturiere of her time” and that he couldn’t “imagine that Oedipus’ daughters would be badly dressed.”

Click through the gallery below to explore the full collection.