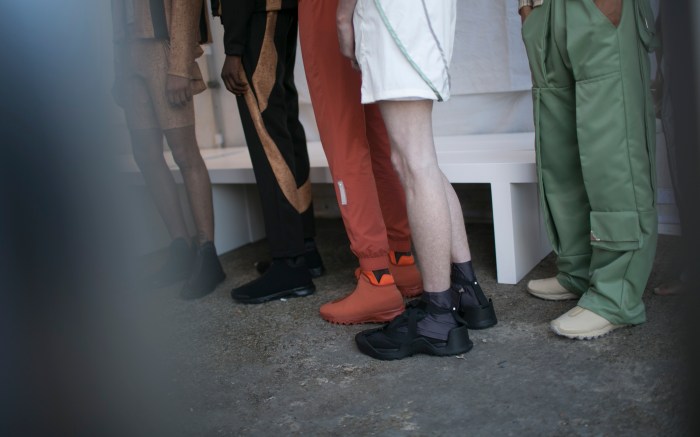 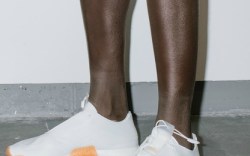 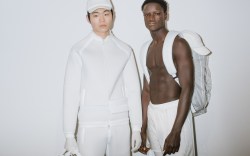 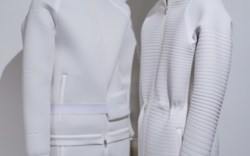 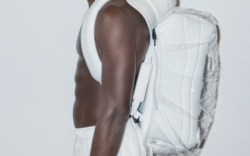 Cottweiler is continuing to offer its vision of futuristic sportswear with longtime partner Reebok.

The London streetwear brand, which is back on home turf after presenting its fall ’17 collection with Reebok at Florence’s Pitti Uomo last January, continued to play with the codes it has been establishing in the last few seasons and crossing over performance-wear with fashion.

Its latest offering, which was presented in East London on Saturday, was heavy on nylon shorts, cropped shirts and fitted jackets made from light sporty materials and contrasting colors. The minimalist, flesh-baring silhouettes highlighted the two new sneaker styles that were introduced as part of the collection.

One of the styles played with deconstruction, with the designers pulling the sneaker apart to include nothing but the shoe’s chunky rubber soles pulled together with multiple buckled straps arranged over the foot. They were worn with tonal socks giving the illusion that the shoes were pieced together. The second was a more sleek pair focusing on agility and ease of movement; it was created with stretchy fabrics that extended to the ankle and were designed to fit the foot like a glove.

“We’ve used a lot of references with safety wear in the past,” said designer Matthew Dainty. “One shoe that we developed has material that comes out of the tongue and wraps around and makes that shape. With Reebok we developed our own overshoe. So the sandal is a complete duplicate of the sole and then it’s just enlarged, 3D printed and then strapped around the foot. So it’s a bit of a play on what we’ve done in previous seasons in terms of that whole safety concept.”

During the finalé of the show, models walked barefoot while holding white and nude versions of the deconstructed sneakers.