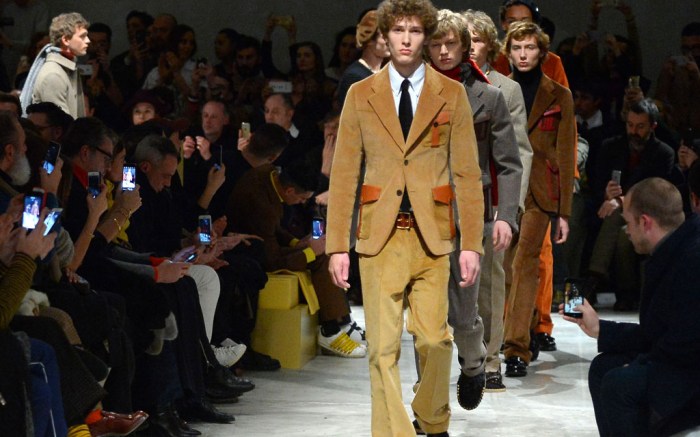 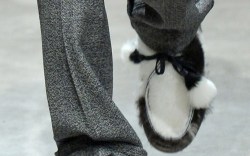 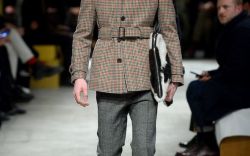 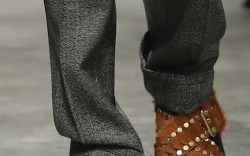 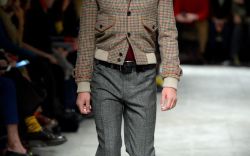 New neutrals was the key message at Prada this season. For the Italian label’s fall ’17 men’s collection today at Milan Fashion Week, which included pre-fall women’s looks as well, designer Miuccia Prada sent out an earthy, textural collection that took cues from both the 1970s and western elements. It particularly included a strong lineup of brown looks, which extended down to the fur-covered moccasins and wallaby shoes.

While the main themes have been regurgitated time and again by fashion designers, Prada once again found a way to make it fresh. The 1970s-style corduroys were reimagined in sharp-cut suits, and patchwork knits were done in cool, chunky sweaters. Meanwhile, western influences like animal hides were done on sleek trenches and pouch bags. Talk about a chic rodeo.

Among the footwear highlights: different uses of fur appeared throughout, too. There was fur tassels on classic penny loafers. Furry crisscross sandals worn with socks. Slip-on moccasins and wallabies were completely covered in patchwork shaggy furs.

The men’s shoes were juxtaposed against the women’s collection, which included satin crystal-embellished heels. They were styled with alpaca wool socks. (It wouldn’t be a Prada show without something a little out of left field, and crystals did the trick). But of course, there was fur sandals for her, too.