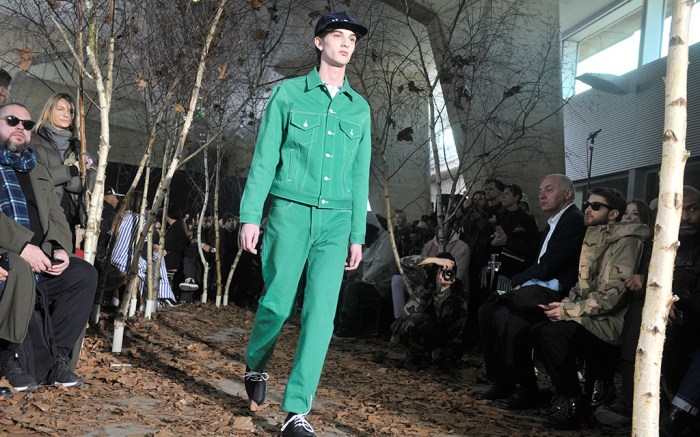 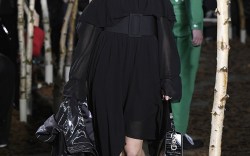 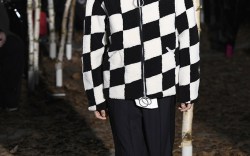 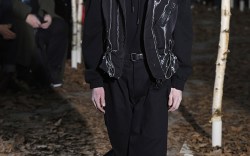 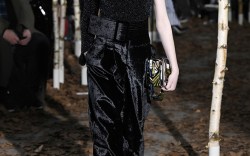 The clue was in the invitation for Virgil Abloh’s Off-White men’s fall 2017 show — a plastic envelope containing two leaves.

The designer, who is also Kanye West’s creative director, shook the tree a little harder when it came to the stage set. It was presented as an autumnal tableau complete with silver birch trees and giant orb lights like the winter sun. The floor came strewn with a sweep of rustling dried leaves.

These proved the perfect stomping ground to showcase the collection’s footwear, and ploughing through those leaves came suitably rugged black sneaker-work boot hybrids with contrasting white laces and the label’s logo stamped in white.

However, it was blink-and-you’d-miss-them, as more often than not, they were obscured beneath the voluminous trailing hems of wide legged pants.

The leitmotif leaves also appeared within the collection itself, in more permanent and infinitely more blingy, form. They came cast in gold leaf, as delicate brooches adorning the coats and sweaters.

The only eye candy components missing were Kim Kardashian West and Kanye West. Though with the circumstances of Kardashian West’s October 2016 robbery are still relatively fresh, one can hardly blame them.