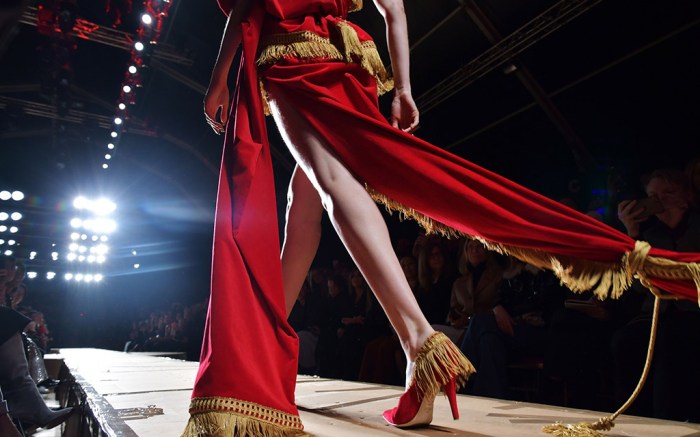 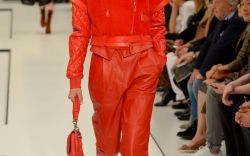 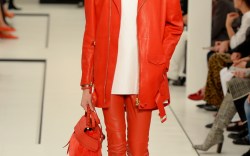 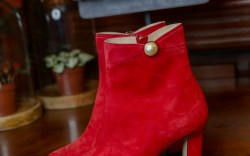 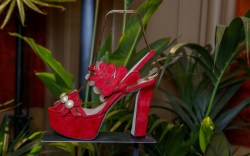 The theme of this Milan Fashion Week could have been called Seeing Red.

Every season has its omnipresent hue, and this go-around that dubious honor goes to searing shades of vermillion, scarlet and cherry.

Either as a key accent (at Fendi all models wore red thigh-high boots with herringbone and other neutrals) or worn head to toe at Tod’s and Max Mara, this shade is what heat seekers will all undoubtedly be wearing.

Another dominant trend was stretch boots. Oscar Tiye designer Amina Mauddi introduced her Georgia style a few seasons ago, but suddenly now it’s a best-seller, worn recently by the likes of Gigi Hadid and Katy Perry. It was hard to find a designer or collection that didn’t follow suit. Gianvito Rossi’s printed-sock style had the just the right amount of verve.

One way designers differentiated themselves, though, was with individual tales on shoe bijoux. Be they hammered gold hardware at Prada (the best of the bunch, no surprise there), fashioned as baroque and Byzantine buckles at Giannico and Casadei, or strass anklets at Jimmy Choo, no magpie could resist.

Heel shapes also allowed shoes to stand out from the block heel and stiletto masses. Giuseppe Zanotti and Sergio Rossi went with narrow plank heels, the former’s were even ornately inlaid, while Paul Andrew brought back Salvatore Ferragamo’s iconic (and aerodynamic) F heels.

Click through to see more of what stood out in Milan.