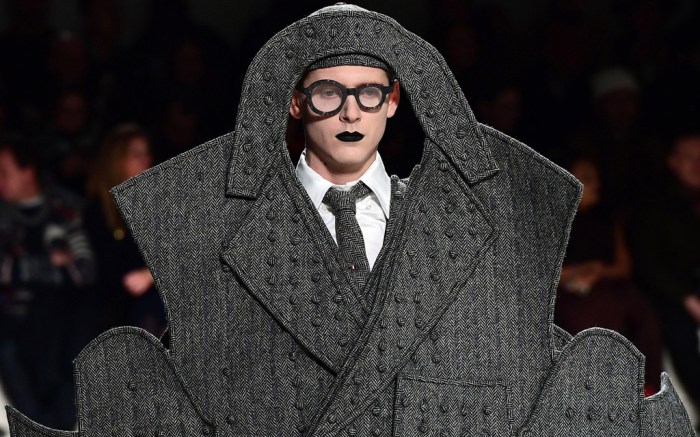 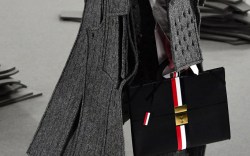 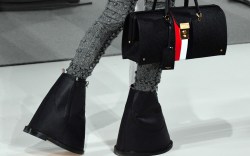 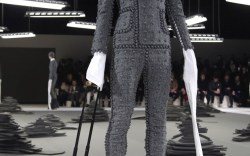 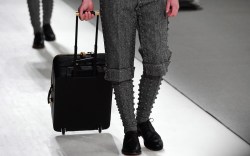 Thom Browne is no stranger to the avant-garde.

The theatrical designer, who showed his fall ’17 men’s collection today at Paris Fashion Week, continued his dramatic thesis statement this season, offering a show filled with exaggerated, cartoonish shapes — a message that extended right down to the ballooned shoes.

Attention-grabbing gimmicks aside, it’s easy to forget that Browne’s strength lies in the tailoring. Yes, the models sported black lipstick and wore wool caps that had built-in aviator goggles. Yes, the models walked down the runway at a deliberate snails pace. Yes, the shirt sleeves dragged to the floor. But that’s all part of Browne’s eccentric charm — dig a little deeper, and you’ll see he actually applied interesting finishes to his signature suits, such as little wool buttons applied as all-over studs.

As for the shoes: There wasn’t much of a wearable, commercial-minded collection here. There were some black lace-up brogues, though, which helped give the collection some sense of realism.

Earlier this month, Browne also debuted his fall ’17 men’s collection for Moncler during Milan Fashion Week. The show featured an extensive set, including a forest covered in fake snow. Never a dull moment.

For more Thom Browne looks, click through the gallery.