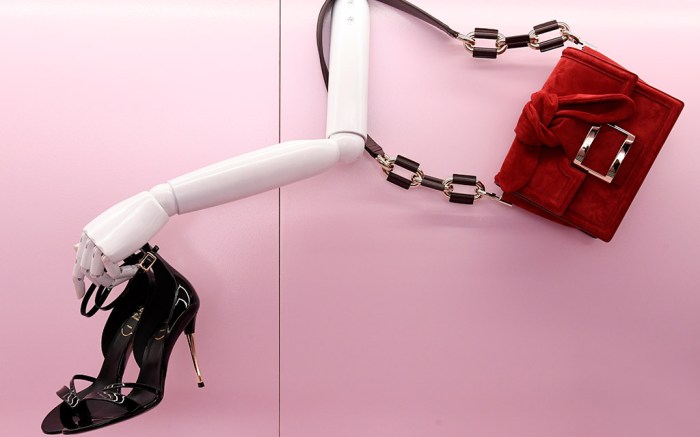 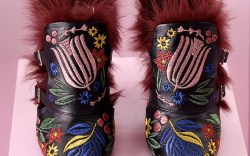 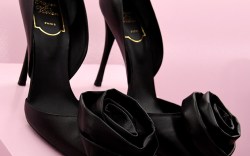 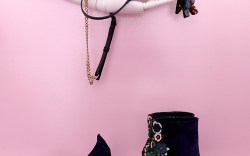 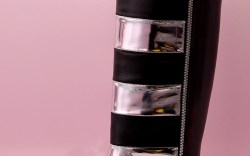 Celebrated French artist Jean-Paul Goude created an audio-visual installation that set the scene for Roger Vivier’s fall ’17 collection. Titled “All Singing, All Dancing,” it featured a grid of more than 100 dancing feet and singing clutches, with music by Sam Spiegel. The booming and graphic piece was projected on a large cube surface that welcomed guests upon arrival to the Paris Fashion Week presentation like one giant beatbox.

This season, creative director Bruno Frisoni cited the world of interiors as his starting point. “I like to think of shoes and bags as the finishing touches to an outfit, quite like furniture and art are to rooms,” he said. “It’s all about what you can bring from the world of decor into your accessories.”

The idea of a curated space with collected objet on display could be seen in the blush-walled, black- and white-carpeted corridors. A floral arrangement translates to fleur printed boots, and striped wallpaper was reflected as a colourful leather patchwork on shoes, while a 19th-century ottoman fabric inspired the textile used in a series of pumps and ankle boots. “The patterns on sofas and ottomans inspired the jacquards I used,” he said about the well-appointed footwear.

Frisoni also cited an early ’70s David Bailey photograph of doe-eyed English model Penelope Tree as his catalyst for the house’s wide selection of cool cropped boots, most notably the new Podium Square buckled style. “She had something between proper and rock punk, in a way. And worn with a short mini dress, which I loved,” Frisoni said. “She was so inspiring.”

Frisoni also shared that his renovations of a new home in Paris “for some time now” influenced his approach this season. “I love home design, but when you are two people, there is a lot of compromise,” he said, referencing his partner, jewelry designer Hervé Van der Straeten, with whom he also shares a Moroccan residence. “He does all the structural and architectural work. I come in and choose the materials, surfaces and accents.” Talk about a stylish pair.