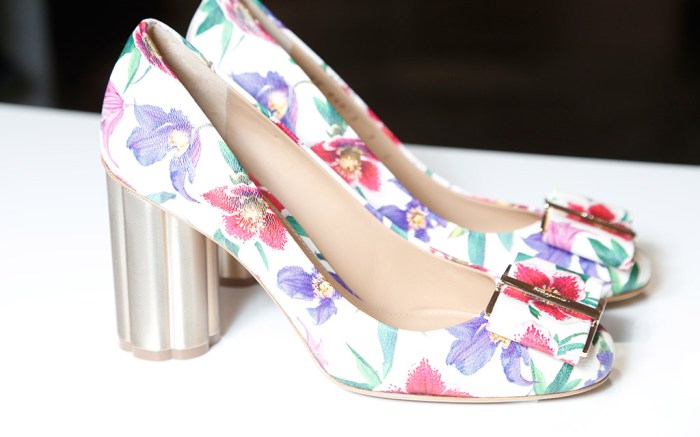 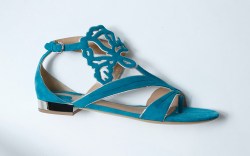 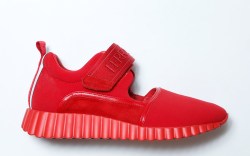 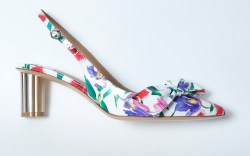 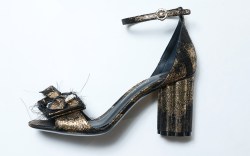 Both the Italian house’s late founder and Andrew, currently charged with designing the women’s footwear, shared a flare and fascination for the botanical, which translated directly to the blooming footwear on display and indeed the display itself, decorated with Andrew’s own photographs from the London Flower Market.

“It was evident in exploring Salvatore Ferragamo’s archives a romance between [him] and nature, discovering incredible floral motifs in macrame, raffia and delicate embroidery,” Andrew tells Footwear News.

“For Pre-Spring, I channeled this love affair by reimagining iconic silk scarves with boldly colorful patent leather sandals adorned with the statement Flower Heel which I’ve continued to reweave into the Ferragamo vocabulary.” The resulting styles, with removable foulard straps, were in chime with Ferragamo’s overarching elegance and were reminiscent of classic client Audrey Hepburn’s preference for accessorizing with a well-tied scarf.

An iris floral motif, which cropped up as a high-tech seamless cutout on heels and print on prim pumps, also had thoughtful house significance. “The iris flower is the symbol of Florence,” said Andrew. “Soft floral elements combined with architectural intrigue bring to life a sense of playful levity with a more modern feminine elegance.”

Elsewhere, in his second season as women’s footwear design director, Andrew continued to rework and reintroduce two looming icons: the F Heel and the Flower Heel, the latter of which first appeared in the Ferragamo collection in 1939. Andrew expressed the scope of its signature petal footprint and clustering column profile by playing with scale and shades — from just a gilded slice finishing chic satin mules to slenderized lacquer versions on strappy sandals in brilliant matcha greens, peony pinks and rich golds for a more evening spin. The details really sang here, with soles saturated in the same hue as shoes (say, aqua or canary) to great effect.

Sneakers and sportif sandals rounded out the offering. With their newfangled touches — stretch knit uppers and logo strapping, they represented a more future-leaning Ferragamo. But upon closer inspection, they also has subtle Flower-scalloped soles that harked to the past. Clearly this archive, and Andrew’s imaginative approach to house codes, knows no bounds.

Click through to see more of the Salvatore Ferragamo resort ’18 collection.