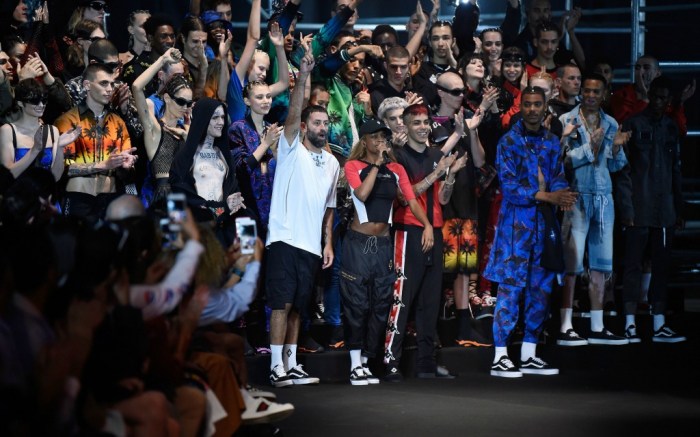 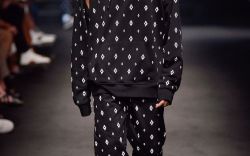 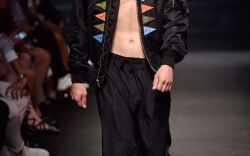 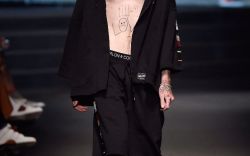 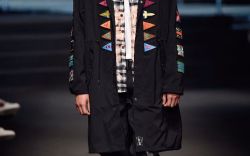 Skateboarders practicing their moves outside the venue for Marcelo Burlon’s co-ed County of Milan show on Saturday provided a clue as to the footwear that would be on display in the designer’s spring ’18 collection.

There was a decidedly 1990s vibe at play in his Milan Fashion Week show. The models on the runway wore two-tone orange-and-navy skate shoes with the heels trodden down like slippers, while black sock boots made of neoprene came with flashy strips of neon on the soles.

These looks were interspersed with classic black sneakers by Vans (not an official collab as in last season’s partnership with Reebok, but rather, just for fun).

It certainly made for an eclectic mix in tune with the ready-to-wear, which riffed off a cross-cultural mash-up. The girls wore extreme platform sandals, lashed around the ankles with a panoply of straps and harnesses. “They were also from the ’90s,” Burlon said backstage after the show. “I was a club kid and that was the era I grew up in.”

Overall, the theme was the notion of a “gothic surfer,” Burlon said. “I got the idea from a documentary about these kids trekking the Mitre Peninsula in Pategonia, where I’m from.”

Burlon himself has just finished a marathon trek. He was a contestant in a reality TV show called “Pechino Express,” the Italian version of “The Amazing Race.” The show is still under wraps, so all the designer could say for now is that it involved hiking for some 6,000 kilometers.

To see more looks from Burlon’s County of Milan show, click through the gallery.