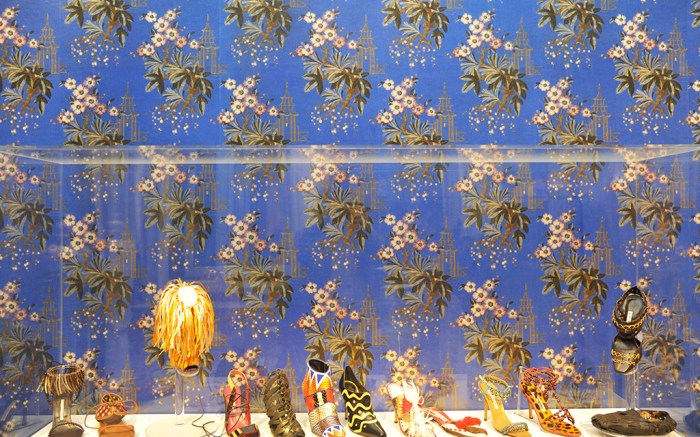 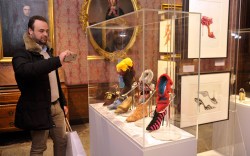 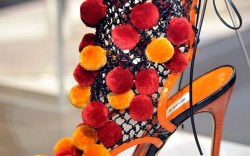 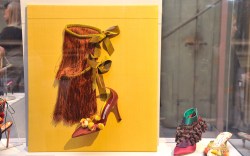 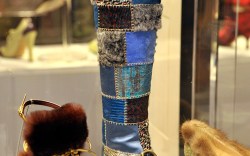 “Joy” is the word shoe designer Manolo Blahnik used to sum up his 46-year career.

Running from Thursday to April 9, the retrospective “Manolo Blahnik: The Art of Shoes” showcases 212 shoes – selected among more than 30,000 styles and 80 sketches. It’s being held in the 18th-century location of Palazzo Morando, situated in the city’s tony district near Via Montenapoleone.

“I do all this with immense joy,” Blahnik said, admitting that money has never been on his mind while he was sketching a pair of shoes. Everything he has ever worked on has been done “just because I like it.”

Curated by Cristina Carrillo de Albornoz, who worked on the project for the past two years, the exhibition intends to celebrate Blahnik’s work as a form of art, highlighting the designer’s creativity, vision and craftsmanship.

The exhibition is divided into six areas according to Blahnik’s inspirations. It includes the “Gala” section, displaying the most imaginative styles, such as the ones created for Sofia Coppola’s movie “Marie Antoinette.” Dedicated corners focusing on materials, art, architecture and the many geographical influences Blahnik had during his creative process are also part of the exhibit.

The “Nature” area showcases Blahnik’s personal favorite piece of the entire selection. Named “Ivy,” the botanical-inspired green suede sandal was created in 1972 for English fashion designer Ossie Clark. “I don’t know why, but I’ve got a real affection for these shoes,” Blahnik said.

In addition, the style conceived for his late friend Anna Piaggi is also a standout piece, displayed in the “Core” area among the styles dedicated to important personalities in the designer’s life.

“[Piaggi] has really been the soul of Milan for me,” said Blahnik, defining her as a sister, a “daily work of art” and a major inspiration throughout his life. Blahnik remembered how Piaggi was the one who brought him to the city, to work with local factories. He also stressed how Italians never fully got her. “Everybody believed she was always an eccentric lady … but she was much more,” Blahnik said, mentioning her “absolute intelligence and kindness,” among other qualities. “I still miss her today, and I will miss her forever.”

In addition to Piaggi, Blahnik dedicated the exhibition to another of his beloved Italian friends: longtime Vogue Italia’s editor-in-chief Franca Sozzani, who died on Dec. 22.

“I loved her. I knew she was ill but didn’t believe she [would be gone] so soon,” he said, revealing that Sozzani herself asked him to stage the exhibit. “She should have been here today. This is her exhibition.”

Moving forward, the designer said his business would follow a more digital path under the direction of his niece Kristina Blahnik, who serves as CEO of Manolo Blahnik International. Meanwhile, he will continue to sketch and work on other collaborations, following the success of tie-ups with Rihanna and Demna Gvsalia’s Vetements, whose denim “9 to 5” boots and bright “Fisherman’s Boot” style were displayed in the exhibit.

“I’m doing a little collaboration with a young girl named Grace Wales Bonner,” Blahnik said. The 25-year-old Central St. Martins’ graduate designer was the winner of the LVMH Young Designer Prize in 2016. She was selected by a panel that included Karl Lagerfeld, Nicolas Guesquière, Phoebe Philo and Marc Jacobs. “She’s very young, delicate and I love her sensibility. She has very clear ideas, and I like what she does,” said Blahnik.

Milan is only the first leg of the touring exhibit, which will stop in other relevant locations for the designer. These include the State Museum Hermitage in St. Petersburg, Russia, where he often looks for inspiration; the Museum Kampa in Prague, Czech Republic, which is the paternal home of his family; and the Museo Nacional de Artes Decorativas in Madrid, to honor the designer’s Spanish roots. As its final stop, the show will be held at the BATA shoe museum in Toronto in 2018.

To see all the shoes from the exhibition, click through the slideshow.