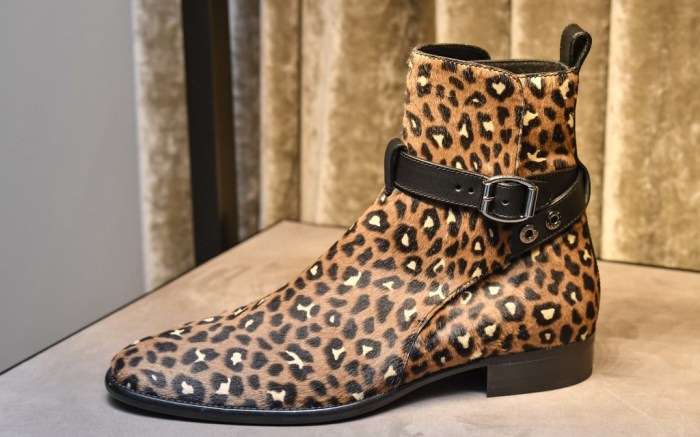 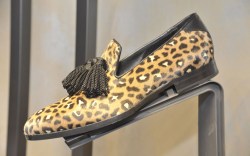 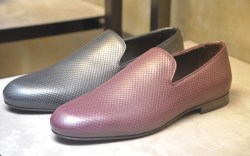 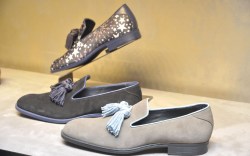 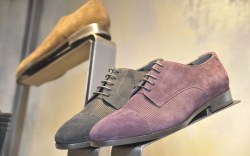 Jimmy Choo’s fall ’17 men’s collection, shown today during Milan Fashion Week, focused on the idea of clashing. It aimed to combine unexpected materials and fuse categories together, such as using dressy finishes on more casual styles.

In addition to introducing new hybrid shoes — like a velvet slip-on sneaker that resembled a smoking slipper — the new offering made sure to tick all the right shoe trends, too, using shearlings and corduroys as well as introducing sock-fit sneakers.

Creative director Sandra Choi explained her desire to convey the unexpected. “The hybrid situation is something I like Jimmy Choo to own,” said Choi. “The balance between sartorial and a little bit of edge. I live in London, and the dapperness is there, but there’s also this huge punk movement that we’re proud of.”

A prime example of this idea would be the dressy Holden jodhpur boot that was done in a leopard-printed suede, which the label developed themselves. It mimicked the look of The Clash, a design inspiration for Choi this season, but was more polished. Equally as fun: a lace-up derbie that looked as though it was printed in camouflage, but was actually an abstract print of pinup girls. Choi called it “pornoflage.”

Choi also played with Jimmy Choo’s recurring star motifs this season, presenting them in subtler variations. “The star motif is always present for us, but I wanted to challenge it so that it’s not always primary,” she said. “It can live within our world whether it’s more aggressive, or in a trainer that’s more tonal and dressed up.”

Compared to its previous seasons, the collection here felt much more cohesive overall. Though it cast a wide net in terms of treatments and styles, the brand made attempts to continue them across all of the footwear categories.