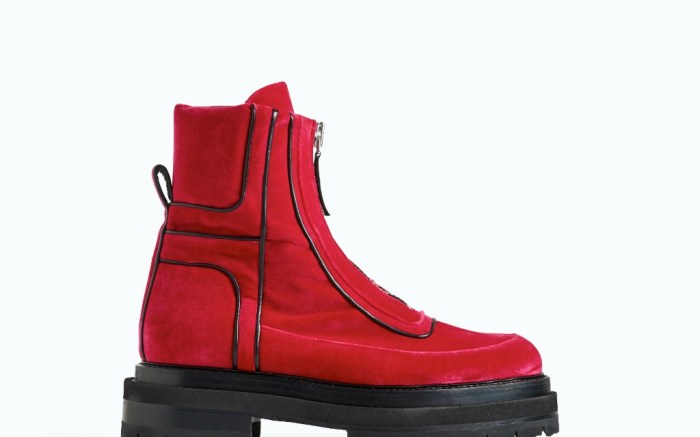 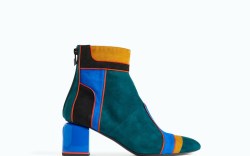 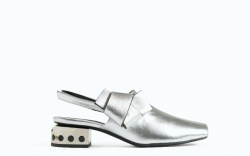 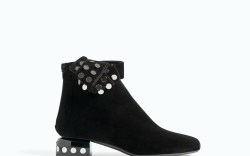 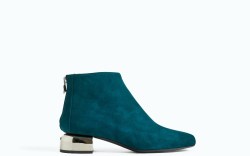 How to construct the perfect woman? Pierre Hardy started with the feet, of course.

For his winter Atelier collection, the Parisian designer was inspired by the movie “Blade Runner” and specifically its two contrasting characters, Rachel and Pris.

The “Machina” styles take cues from Pris’ bodysuit. Pumps, ankle boots, over-the-knee looks and biker styles were crafted like a second skin, according to the designer. Geometric cutouts, varnished leather and suede as well as white, silver or red piping accent the styles.

The “Lunar” part of the collection evokes the spirit of Rachel’s chic character and reference the Japanese commercials aired on buildings during street scenes in the film. Velvet bows make a statement on sandals and boots, while metallic sequins stand out.

The science-fiction film, which takes place in Los Angeles in 2019, mixes elements of the past and the future, something Hardy wanted to do with his collection.

“Whether it’s in ‘Blade Runner,’ ‘Hunger Games’ or ‘Interstellar,’ I’ve always found it interesting that in film, to evoke the future, one very often deliberately uses the reference of retro elements,” said Hardy.

This is the second time Hardy has presented his Atelier line, his most experimental styles of the season.

To see the full collection, click through the slideshow.

The Pumps at Rochas Had Glittering ‘R’ Logo Buckles