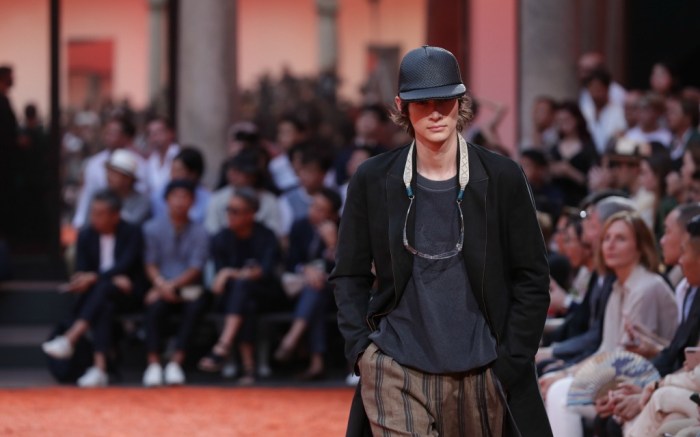 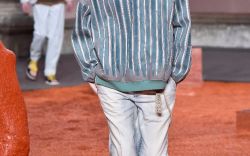 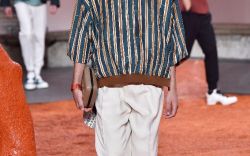 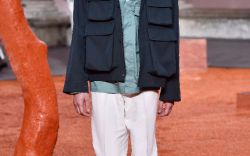 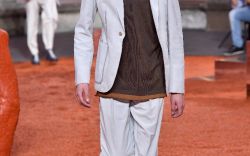 How does a couture label address the sneaker issue? If you’re Alessandro Sartori, artistic director at Ermenegildo Zegna, it’s easy. For his spring ’18 ready-to-wear collection, shown at Milan Fashion Week on Friday, he took the label’s triple-stitch couture logo and insinuated it into the very fabric of his footwear.

On the Tiziano high-tops, it had been blown up and emblazoned on the side like ticker tape. This was reinforced in the criss-cross of the laces and also more delicately at the heel. Even the soles featured a stitched leather insert, while the undersoles came in a herringbone pattern like the weave of an expensive suit.

Two iterations of the Tiziano sneaker — in khaki and off white colorways — will be available starting today, for $895, at the Zegna flagship stores in Milan, London, Paris, New York and Shanghai.

The show, which took place Friday on the first day of Milan Men’s Fashion Week, was staged in a historic courtyard, pimped out to resemble a futuristic garden, complete with tangerine gravel and an entryway made up of a maze of mirrors. Drummers in the gallery above provided a suitably dramatic soundtrack and as the sun set, models remained in their finale positions atop mirrored plinths and the whole venue became a giant cocktail party for the milling guests.

To see the full collection, check out the gallery.