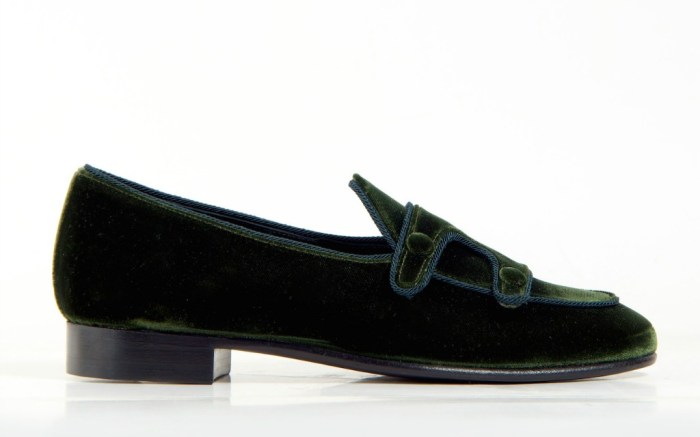 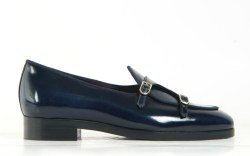 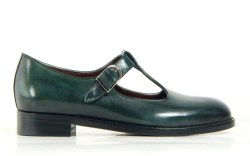 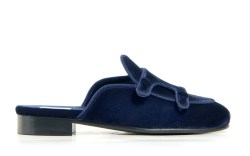 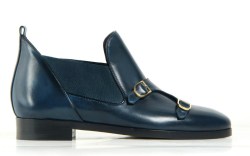 The design duo met in 2010, after starting the successful menswear blog The Three F. After brainstorming their next projects, the idea for launching shoes happened somewhat organically.

“We were always working with text and images, but we wanted to create something where our ideas turned into a product,” said Cirulli.

Plus, Fiora added, “We’re both obsessed with shoes.”

The fall collection focused heavily on dress shoes and eveningwear, taking cues from styles from the 1950s. There were classic leather loafers, which had a lower-cut vamp for a new silhouette. There were saddle boots in colored leathers. And there was newer ideas, too, such as the velvet mules with monk-strap detailing.

For the designers, maintaining a dressed-up look is key, even in the more casual styles such as slip-on sneakers. “I like shoes that are classic, but with a twist and a little more fashionable,” said Cirulli. “We don’t want to just make traditional shoes.”

The fall shoes retail for roughly $300 to $600, and are made in a factory just outside of Milan. Learning about shoemaking is something the duo have done along the way. “When you have a passion for shoes, you might now know all the technical aspects of making them, but you know what end result you want,” said Cirulli.

The label is carried in more than 30 stores in key markets such as Asia, the Middle East and Europe.

“We hope to expand in the U.S.,” said Fiora. “We had a successful selling season last season, including an exclusive with Shanghai and Hong Kong in Lane Crawford. We want to keep it going.”

For more of the shoes, click through the gallery.