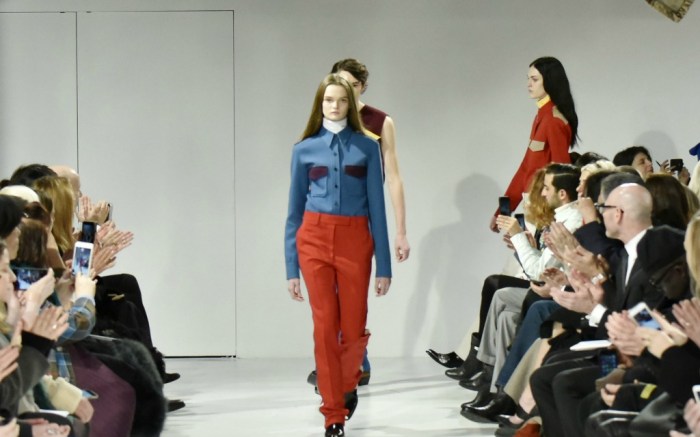 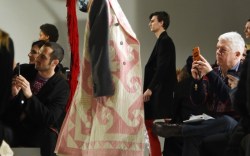 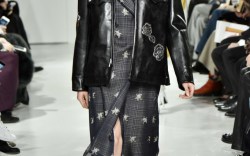 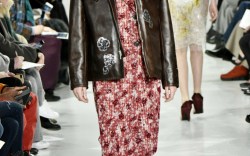 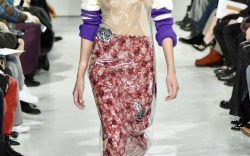 Call it the buzziest show of New York Fashion Week. Raf Simons debuted his much-anticipated debut collection for Calvin Klein today. The fall ’17 coed collection tossed gender constraints aside, instead offering interchangeable looks that were worn by both sexes — an increasing trend designers have been embracing on the runway.

For instance, double-breasted suits appeared on him, then her. The same went for Simons’ version of the Canadian tuxedo, where head-to-toe denim looks were paired with clunky steel toe boots. Though he sent out a few feminine silhouettes in his women’s offering — like sweet printed chiffon dresses — Simons made sure to pair them with sharper, menswear-inspired pieces.

Even his heeled sandals and pumps had a bit of subversion to them. They were finished with plastic toe caps — a material he used as overlay on feathered dresses — and architecturally shaped backs. The strong footwear silhouettes recalled his tenures at Jil Sander and Christian Dior, where he often used bold shoes to offset anything that could be deemed too pretty-pretty.

Meanwhile, the men’s footwear offering steered toward clunky dress shoes. Are squared toes officially back? He explored a similar aesthetic for his own label’s show during New York Fashion Week: Men’s last week.

For more looks from the show, click through the gallery.