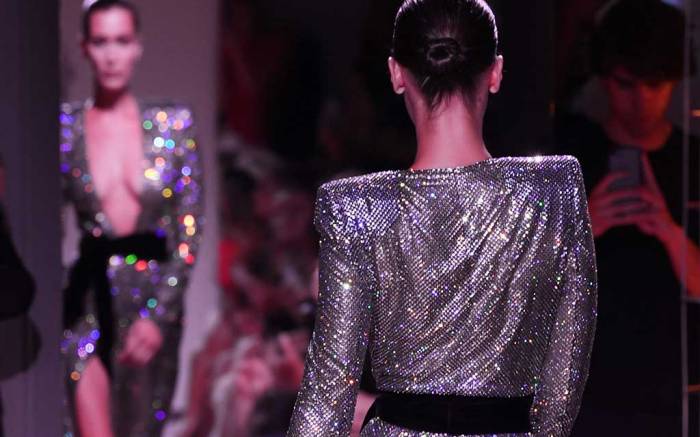 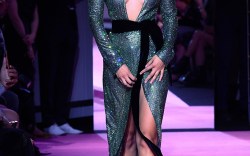 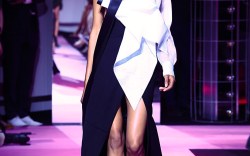 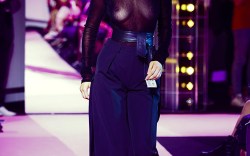 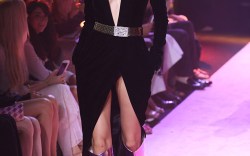 Talk about a high-octane way to end a Tuesday of haute couture. This evening, Alexandre Vauthier turned Paris’ Grand Palais into a pumping ode to Studio 54 complete with disco balls, strobe lighting, a pink haze of dry ice and Bella Hadid in a plunging sequin frock.

Shoe designer Amina Muaddi hit all the right notes with her footwear and following the show, she spilled exclusively to Footwear News about her inspiration and all the key styles in the show.

“The vision was sophisticated, modern and ultra chic,” she said, “but there was also a fun twist with the Studio 54 disco vibes.”

Those boots: “They were a brand new shape, under the knee with a very tubular structure.”

The jingle jangle Swarovski sandals: “Using Swarovski has became a real signature for us but we try to reinvent them and reinterpret them in a different way every season. This time we went for moving Swarovski tassels which made the feet sparkle with every step.”

The giant bows: “Alexandre always does bows so I took them from the clothing and put them on the shoes.”

The pumps: “We also did a very classic pump silhouette but with modern cuts and PVC inserts.”

The feathers: “There were these huge boots made out of feathers – fun but in a sophisticated way.”

The frosted lace: “The lace boots were covered in hand-positioned Swarovski crystals; see-through and sexy. We wanted them to look like a red carpet gown with the structure of a fierce boot.”

The last word, however, goes to Mr Vauthier himself.

“Sometimes couture can be super serious but I think it can still be fun,” he said. “You can have the most expensive clothes in the world but it’s a question of attitude. Enjoy beautiful things but don’t be obsessed.”

Now there’s some advice worth taking.