Exclusive: Alexa Chung on How She Plans to Prove Herself as a Designer 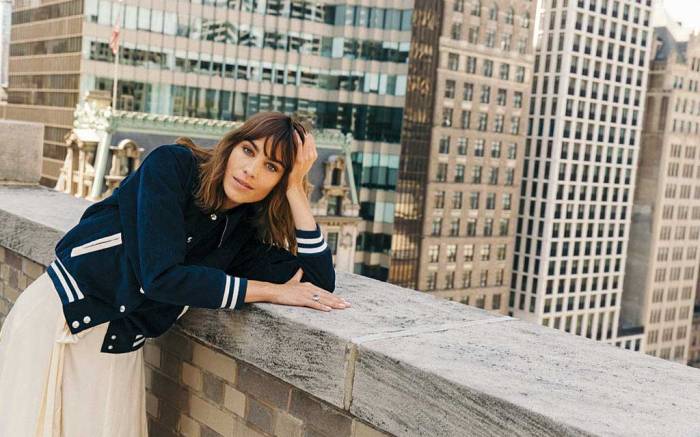 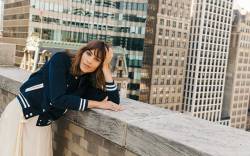 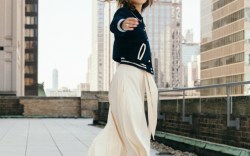 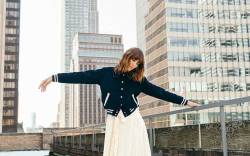 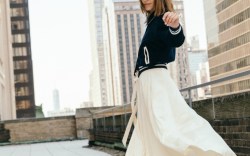 “I don’t remember there being a lightning bolt moment,” Alexa Chung said of deciding to launch her own brand. She’s assembled on a shaggy fur chair at FN’s New York offices, one Cuban heeled boot perched on the bent knee of her embroidered corduroy three-piece suit, ready to share her unfiltered version of events that led to the birth of Alexachung.

“There was kind of a convergence of scenarios. I was getting to the end of my tether of [residing] in New York City but not necessarily working here,” Chung said of the modeling-cum-muse gigs that had her on a constant Los Angeles, London, Paris loop. “I was living in the East Village and essentially just walking up and down Avenue A every night getting drunk. I thought at 31, that’s probably not the right direction for my life,” she deadpanned. “I wanted to go home. And I didn’t have a boyfriend.”

But the British style icon —who’s also a journalist and TV host — was self-aware enough to recognize her currency — and capitalize on it. After all, Chung had racked up an impressive roster of design gigs as a collaborator with brands including AG Jeans, Mulberry, Longchamp, Marks & Spencer, Ugg, Maje, Madewell, Eyeko and Nails Inc.

“I realized I couldn’t just pop around anymore,” Chung said of her lucrative collaborative flings. “As much as it was educational and a great experience to do so many, I felt that if I was still being asked that often, maybe there was something there of substance that I could build on and create my own thing. This was something I’ve wanted to do since I was 18.”

The unconventional beauty was also eager to push reset and return to her roots. “I get bored easily. I just thought it would be fun to make clothes, and I wanted to make them in England because everyone is funny over there and I have quite an odd sense of humor,” said Chung, who is the product of an English mother and Chinese father. (For a behind the scenes look at FN’s cover shoot, click through the gallery.)

The designer, who won FN’s 2015 Style Influencer award, officially launched her collection at retail in May — and she’s determined to build her business on her own terms. “I just put one foot in front of the other — each step was incremental,” Chung said about beginning her brand.

Her first and easiest move was shoring up investment: The business is being financed by Pembroke VCT, Peter Dubens, the co-founder and managing partner of Oakley Capital Private Equity, and an undisclosed group of high-net-worth individuals. Secondly, Chung, 33, brought on Edwin Bodson (formerly of Haider Ackermann and Ann Demeulemeester) as her managing director, business strategist and operational expert. Or, as she refers to him, “Dad. He tells me what to do, and I often listen.”

Bodson concurs on his varied duties and fatherly nature, even though he is two years younger than Chung. “It’s my job to crack the whip, make sure we are structuring the business properly and try to make her wishes possible when they make good sense,” said Bodson over the phone from their new East London headquarters. “The reality is, I’m the one that also has to tell her no sometimes.”

That’s certainly one marked difference between being a coddled celebrity versus a conscious creative director, Chung’s official title. “I’ve had to tell her that we can’t just make one style out of one fabric or we will never make the minimums,” he said by way of an example. “Or with our shoes, we can’t just offer a style in one colorway, even if that’s her personal favorite.”

Alexachung collections are released four times a year, with two in-season drops and two advance offerings for wholesale accounts. (All future collaborations will also be housed under the company umbrella.)

To date, the line is carried at Bergdorf Goodman, Matches Fashion, Net-a-Porter, Selfridges, Galeries Lafayette, Colette and more than 70 other international points of sale, including her own website, Alexachung.com.

The designer is involved in every aspect of the advanced contemporary label, which includes tailoring, knits, denim, dresses, separates, a smattering of accessories and edited selection of shoes. (The fall footwear collection is priced from $260 to $585.) “What I like is that she covers so many areas in a quirky way,” said Elizabeth von der Goltz, global buying director at Net-a-Porter, who lauded Chung’s strong following. “As a style icon, she’s admired by so many different kinds of women. She’s young, plugged into the industry and a muse to so many designers.”

As a social star, Chung has an impressive following on Instagram that allows her to transcend the walls of the fashion industry and connect instantly to consumers. “She has a great network that is helping her build her client base,” von der Goltz Said.

It’s clear the designer is comfortable being in command on social media and in front of the camera. And she’s already racked up valuable knowledge about the intricacies of building a brand.

Still, the footwear business has been a notable learning curve. “Obviously, I’ve always been an avid shoe lover, but knowing that something was called a ‘last’ was news to me,” Chung admitted. “Even so, I do enjoy it because it’s more like sculpture than anything else.”

She kept the styles deceivingly simple. “For the first collection, I wanted to make some Chinatown Mary Janes like the $5 ones from Pearl River Mart,” she said of the collection, which is made in Portugal.

Bright pink and white PVC statement boots are her recent favorites, and the category has gotten off to a strong start.

Bodson said footwear already accounts for 15 percent of the business. “Alexa’s style is all about completing the silhouette with the right shoes,” he said on the importance they play. “In order to properly present the look and proportions, we needed to have them in the collection from the start.” Chung agreed and noted it’s an area in which she’s more inclined to experiment. “Even though I dress in a classic way, shoes and bags have always been where I’m a bit more daring.”

Suzanne Pendlebury, buying manager at Matchesfashion.com, said shoppers are clearly responding to Chung’s footwear offering. “I love the red Mary Jane flats, and we’ve already done a reorder on this style,” Pendlebury said. “They are a perfect daytime shoe, but also great for the party season ahead.”

While Chung is eager to experiment when it comes to design, she has proceeded more cautiously in other areas. In 2016, when it came to building a team around her and figuring out what her own role should be, “I genuinely didn’t know where to start,” admitted Chung. Luckily, she’d recently come off a crash course in the business of fashion. “I’d just made a documentary series for British Vogue where we researched every corner of the industry. Via doing that, interviewing Joseph Altuzarra or Christopher Kane, I was learning more about how people set up their companies.”

Soon, Chung and Bodson were overseeing a design, marketing and sales team of 20, many of which came from Central Saint Martins and other brands she admired. Still, she was careful not to poach from her friends’ labels or outwardly seek help from her rich network of fashion mates.

“Since school days, I’ve been loath to ask for a favor ever,” Chung said. “If I’m stuck in a ditch and you’ve got a ladder, I would rather wallow there. I’m hyperindependent.”

That said, she knew the types of people with whom she was looking to populate her work world. “Just for the fluidity of the office vibe, I needed to be surrounded by Brits who could respond to my memories and weird stuff,” said the Hampshire native. “I wanted a side wink to things from the past to come through. I thought it would just be a quicker shorthand with people of a similar age and from a similar background. Even though I’ve lived away for seven years, I still feel quintessentially British.”

After a successful launch, Chung is looking forward with knowing pragmatism. “Now our challenge is to just keep it fresh and keep it going,” she said. “There might be a bit of a beginner’s luck situation, so we still have to prove ourselves.”

But just to whom might come as a surprise. “A lot of my friends are my style icons,” she said of her target customers, the men and women to whom she WhatsApp snapshots to gauge their response to new products.

Chung is determined to carve out a place in the highly competitive industry — and she wants to avoid being labeled a celebrity designer. “It’s interesting, I’m not attracted to celebrity style. A lot of people dress like s**t. I respond to authenticity,” she quipped. “In my brain, I’m more akin to a creative director of any company as opposed to a celebrity.”

Designer and stylist Tabitha Simmons — who named her own best-selling Alexa flat after Chung — said she has always admired her friend’s singular style. “It comes so naturally and never feels forced. Yet she always looks incredible,” Simmons said. “She’s not afraid to break out of a mold by being a little unexpected, forward-thinking and mixing in tomboy elements. A lot of girls look up to her.”

When Chung decided to strike out on her own, Simmons said she and other industry peers had the same reaction. “What took her so long?”