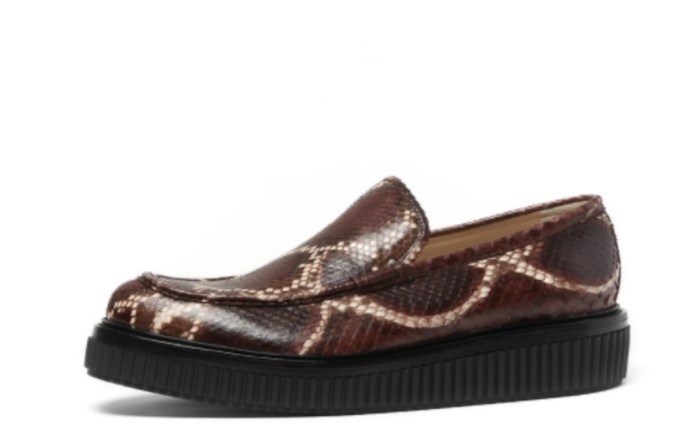 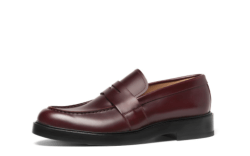 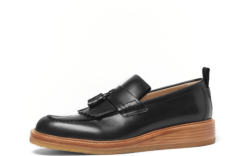 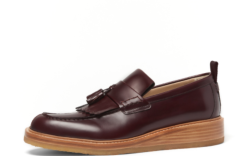 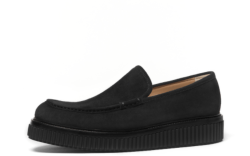 This is a footwear trend that promises to be massive for spring ’18, but as ever, the designer totally made it his own.

“I was looking at military boots from the late ’50s and early ’60s,” he said of his khaki canvas styles with their contrasting spazzolato details. Denim alternatives proved a nod to patriot uniforms from the Vietnam war.

The models came with lug-style soles and molded rubber vertical striations, making for an elevated update on the creeper.

A python variant was a genius Andrew take on the trend. “There are different camouflage patterns in the U.S. for different regions,” he explained, “there’s one in Wyoming in a Bordeaux red, so I took the coloration and had it hand-painted onto the skin.”

For more off-duty days, sandals came with molded footbeds with the straps overlasted onto a crepe sole. They were all made in Barcelona. Slippers in deerskin featured step-down backs, a skeleton lining making them super-soft.

Denim also made an appearance in the espadrilles — contrast whip stitching in a golden thread, evoking that of a pair of jeans. Evening classics, slipper and derby styles were done in satin and patent python.

New stamped coil sole shoes featured a wooden veneer finished with crepe, offering supreme flexibility, while the air-injected soles Andrew developed last season came as laceups, monk straps and loafers. They were done in leather with elastic slip on straps — a mere step away from an actual sneaker.

And speaking of which, Andrew’s capsule line of kicks with actor Ansel Elgort were also on display.

The two got to chatting at last year’s Footwear News Achievement Awards.  “He came to see us afterwards for some sneakers,” Andrew said. “But he was like, ‘Can I do this in red? Can I have that in a print?’ So suddenly we had a mini collection on our hands.”

The capsule comes in white with black stripes, and red and blue accents, with velcro straps and also in an abstract floral camouflage print — another nod to the military idea that runs throughout the collection.

For more, check out the gallery.