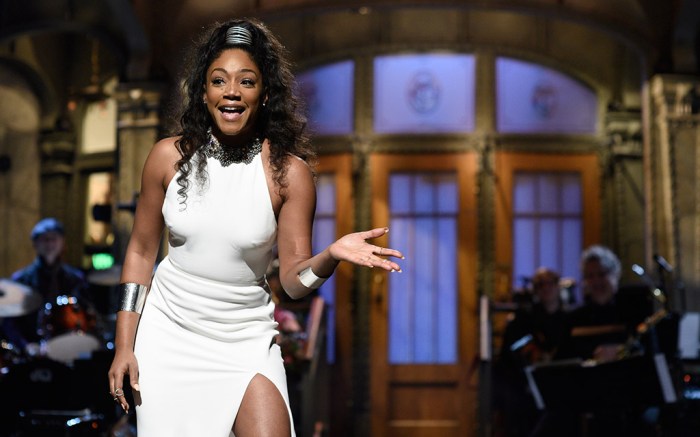 If you’re not familiar with Tiffany Haddish by now, here’s the rundown. She’s the breakout comedic star from this summer’s box-office hit “Girls Trip,” which also starred Jada Pinkett Smith, Queen Latifah and Regina Hall. And though Haddish has been working in the entertainment industry for more than 10 years, we are currently witnessing her rise to stardom.

Last month Haddish became the first black female stand-up comedian to host “Saturday Night Live,” her comedy special, “Tiffany Haddish: She Ready! From the Hood to Hollywood” premiered on Showtime this August, and she is currently promoting her new book, “The Last Black Unicorn.”

Now with all eyes on Haddish, the comedian has certainly stepped up her fashion game. Her style has been fun and chic, having been spotted in a black and white Alice + Olivia ensemble, a Sandro Paris dress and red Gucci sandals, and an Alexander McQueen gown — just to name a few memorable looks.

Haddish also seems to be a sneaker fan. She’s posted some cool kicks on Instagram, including Off-White low-top sneakers, as well as a pair of her own custom Vans.

Click through the gallery to see more of Haddish’s standout style.