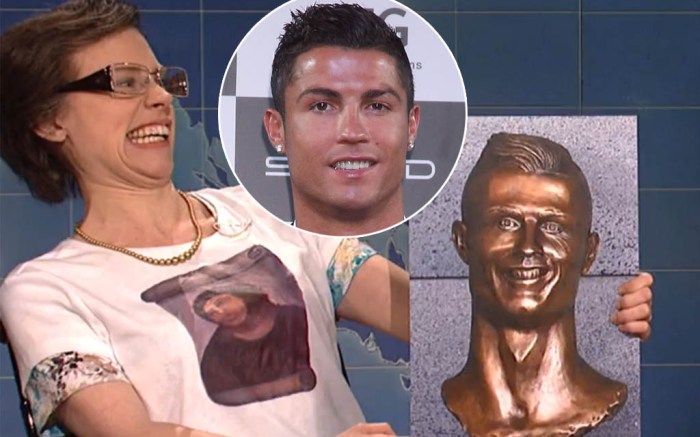 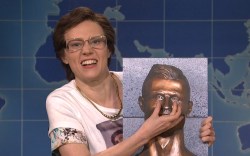 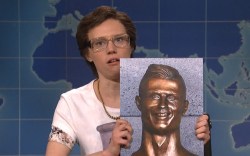 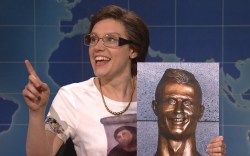 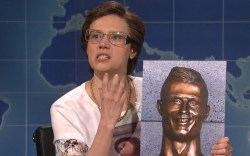 But its resemblance to the Portuguese heartthrob can be hard for some observers to distinguish.

“People are going to love it… It’s like they put Cristiano Ronaldo’s face in a Snapchat filter where all the features are twisted and sucked into the nose,” McKinnon said with unhinged gusto. “He’s the spitting image of Ronaldo, that’s why so many people have spit on it.”

Of course, McKinnon’s review as Gimenez makes perfect sense. In 2012, Gimenez became an Internet sensation after she botched a good-faith attempt at restoring the 1930 fresco Ecce Homo, a historic artwork that depicted Jesus crowned with thorns, but was inadvertently destroyed when she attempted to add colors that were lost over the years. Her edit of the work was condemned by traditionalists, but celebrated by irreverent netizens.

McKinnon continued, “This is a perfect image of Ronaldo playing football. See how the artist captured the image when a soccer ball hit his face.” She added that it resembled “a face of a man who pet a bunny so much it died.”

More quips poked fun at the bizarre composition of his visage. Ronaldo has modeled for Armani in the past.

“Look at his eyes — they love each other; they want to be together,” she said. “It’s a smile that says, ‘I’ve got a fish in my mouth, and I’m trying to keep it in there.'”

McKinnon explained that his neck resembled female genitalia “to show that soccer is not just for boys… It’s a beautiful detail.”

Ronaldo’s own reaction to the statue spoke volumes when he attended its unveiling last month with his son and girlfriend, Georgina Rodriguez. The sports star was photographed laughing, as well as posing with fans who snapped pictures with the bust.

Speaking to The Guardian last month, the bust’s creator, Emanuel Santos, defended the work and said he only had 15 days to complete it. “It is impossible to please the Greeks and Trojans. Neither did Jesus please everyone,” Santos explained.

The Nike-sponsored athlete’s new Mercurial cleats will drop on Monday.

Watch the “SNL” episode below:

Click to see more photos of Cristiano Ronaldo and fan reactions to the bronze bust.