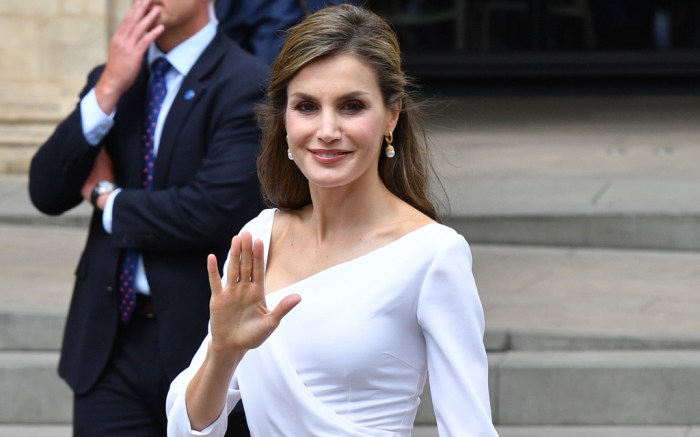 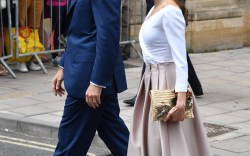 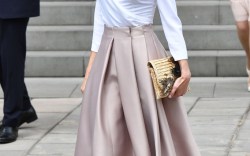 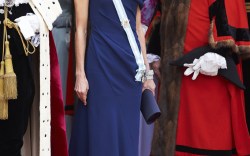 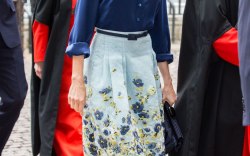 On the Spanish royals’ final day of their three-day visit to the U.K., Queen Letizia of Spain chose to give a nod to iconic British fashion.

Letizia wore a dusty-rose voluminous skirt by high-street retailer Topshop, paired with a simple white wrap shirt and burgundy suede ankle-strap pumps by Lodi, a Spanish footwear brand. On Friday, the royals visited the Francis Crick Institute before heading to Oxford to visit the Weston Library. Outside, the Spanish queen greeted well-wishers, including a group of schoolchildren.

During her trip, Letizia wore nude Prada pumps and strappy sky-high sandals by Magrit. She also attended two banquets, and for both occasions she opted for off-the-shoulder modern dresses, the second of which was by Armani.

This was the first state visit for a Spanish royal since King Felipe VI’s father visited the U.K. 31 years ago. Letizia and the Duchess of Cambridge were both commoners before marrying into their respective royal families — and both women have brought a fashion-forward feel to their roles.

On Thursday night, Middleton followed in Letizia’s footsteps when she, too, wore shoes by Prada for an event at the Natural History Museum in London.

Click through the gallery to see more of Queen Letizia’s looks during her U.K. visit.