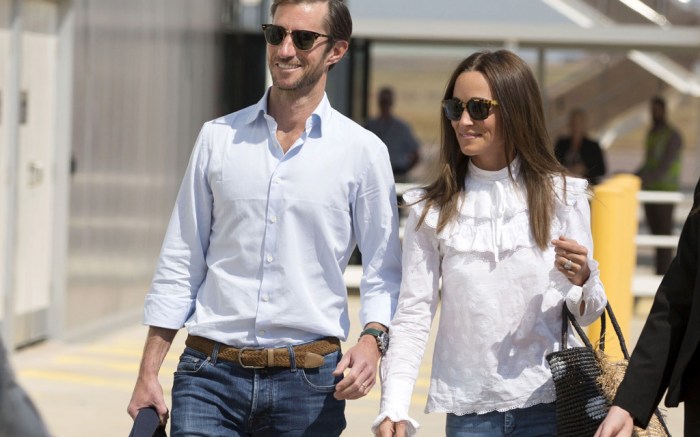 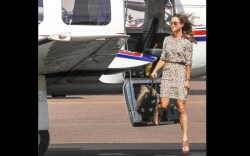 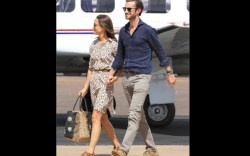 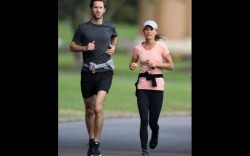 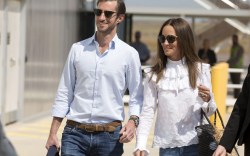 Just like her older sister, Kate Middleton, Pippa Middleton is practical when it comes to her footwear, and she’s never afraid to rewear a favorite pair.

After spending some time on the islands of French Polynesia, Middleton and her new husband, James Matthews, arrived in Australia to continue their honeymoon. The pair were married in England on May 20. They were spotted in Sydney on Tuesday, taking a ride on a water taxi in the Sydney Harbor and hopping on a small plane. They also climbed the Sydney Harbor Bridge, feeding into the couple’s love of adventurous activities.

On Thursday, they were seen at the Sydney airport as they jetted off to Darwin in Australia’s Northern Territory. Middleton traded her Kate Spade striped dress from the day before for a pair of skinny jeans and an Orla Kiely white ruffled top that featured a high neck. She completed the look with a straw tote bag, tortoise print sunglasses and the same pair of black espadrilles she wore the day before.

While some are speculating that Middleton’s espadrilles are by Spanish brand Castañer, that hasn’t yet been confirmed. Middleton’s Orla Kiely top originally retailed for $268, but it’s now on sale for $107.

After arriving in Darwin, Middleton and Matthews were seen boarding a small plane, although it’s not clear where they were headed next. According to Lonely Planet, Darwin is Australia’s only tropical locale, and there will be plenty of water-based activities for the adventurous couple. Perhaps we could see Middleton show off her beachside style on this next leg of the couple’s trip.

It was also revealed that the custom Manolo Blahnik ivory satin pumps Middleton wore with her lace Giles Deacon gown for her wedding cost more than $2,500 — more than the average U.K. woman spends on her wedding dress and accessories combined.

Meanwhile, her sister, Kate, has apparently once again caused the “Kate Effect” with one of her latest style choices. After wearing Superga white sneakers several times, the Italian brand is reporting doubled sales on the particular Cotu Classic style Kate has been wearing.

Click through the gallery below to see more of Pippa Middleton’s honeymoon style.