These Are Met Gala 2017’s Most Dramatic Entrances 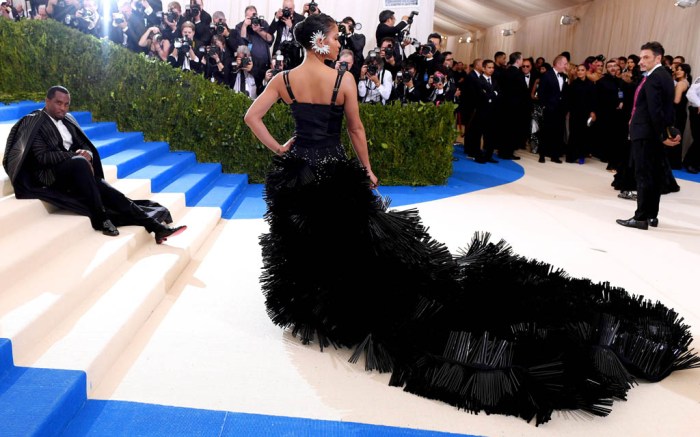 With so many A-list stars in sight, catching the eye is no easy task at the storied Met Gala.

And with an avant garde theme tonight that launches the Metropolitan Museum of Art’s “Rei Kawakubo/Comme des Garçons: Art of the In-Between” exhibit in New York City, it’s not a matter of what you wear, rather it is how it is presented.

Just look to Diddy — who created a spectacular candid moment when he reclined on the staircase while admiring his girlfriend, Cassie Ventura. The entertainer’s Christian Louboutins were positioned perfectly for onlookers to see the red soles as Ventura posed for photos in an architectural dress with a long train. Both were apt companions in all-black ensembles.

Teamwork is fine for scoring attention, but a solo arrival in an alluring outfit makes a major statement, too.

Kendall Jenner pulled off the feat with a barely-there look. The supermodel donned a sheer draped gown by La Perla that incorporated 85,000 hand-painted and placed crystals in dégradé shades, with a sheer painted macramé bodysuit.

“I was inspired by Rei Kawakubo’s concept of ‘un-fabric’ and her ability to create movement out of seemingly immobile materials,” La Perla creative director Julia Haart explained in a statement. “So, I created my own ‘un-fabric’ by affixing stones to a single thread, creating a beautiful and liquid suspension that mirrored the qualities of a fine silk.”

Some other dramatic entrances included Blake Lively, who matched the 150-foot-long carpet in gold and shades of blue. Nicki Minaj made a sizzling style statement with plenty of leg on show and triple-strap Versace platforms.

Priyanka Chopra added a splash of fantasy to what would otherwise be a demure trench coat by extending its hem to form a lengthy train. An asymmetric collar and a tailored bodice that flattered her bustline turned up the heat on the beige number.

She completed the look with minimalist black ankle booties and a pair of metallic earrings.

Click through the gallery to view more celebrity styles at the 2017 Met Gala.