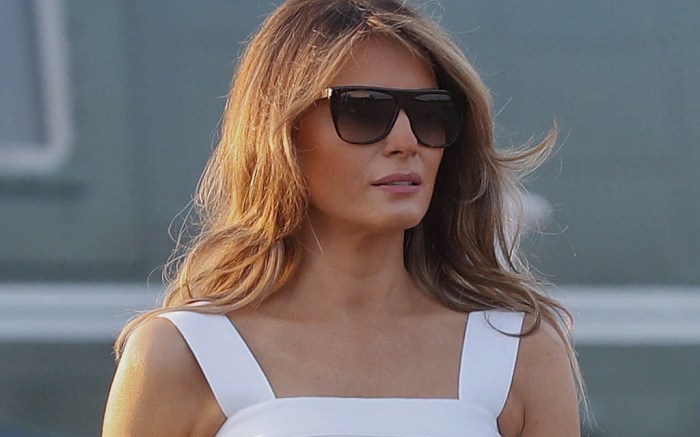 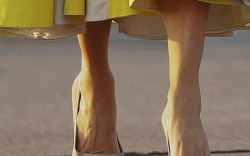 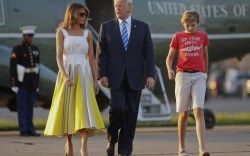 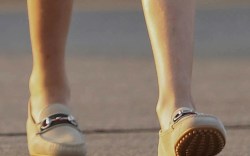 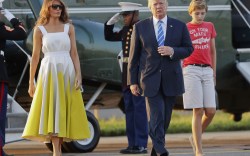 With everyone talking about the solar eclipse — happening today — Melania Trump made a subtle tribute to the rare phenomenon with an extraordinary sight of her own.

The first lady arrived at the White House on Sunday, after a vacation with President Donald Trump and their son Barron, wearing a midi dress by Delpozo that featured bright-yellow hues — the kind to stare at without actually going blind.

Not quite a sunburst, the print incorporates an daffodillike design at the hems but conjures up imagery of the sun, noted CNN. The dress retails for $2,300 but was sold out after going on sale for $782 on modaoperandi.com.

The former model completed the chic look with Manolo Blahnik’s BB pumps in taupe. Blahnik has said his BB pump, designed in 2008, is a “good shoe for every occasion.” And the stiletto-loving first lady put his words into action.

The shoes feature a pointed-toe profile on a sexy 4-inch stiletto heel. They’re available in several styles for $595 on neimanmarcus.com.

Following alongside his mother, the president’s 11-year-old son — whose age is hard to believe given his height nearly matches that of his 6-foot-2 father — stepped out in Gucci loafers.

Gucci’s Kanye shoes incorporate the brand’s signature horsebit ornament and striped bridge on a suede loafer set on a rubber sole. They’re available for $480 on nordstrom.com.

Meanwhile, Ivanka Trump made her return to the White House with her children. The special assistant to the president had on an off-the-shoulder white Formation dress with her eponymous shoe brand — complementing her summer dress with Vance jeweled sandals.

The shoes feature crystal embellishment around the vamp, an adjustable buckle closure at the ankle, a thong-toe and 1-inch stacked heel. They’re currently sold out on bloomingdales.com.