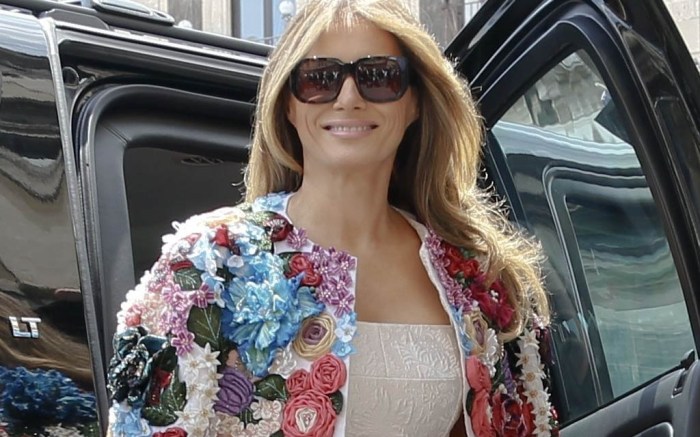 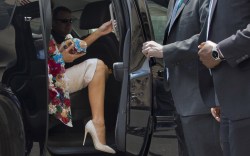 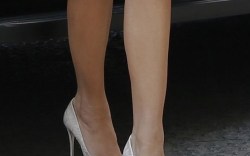 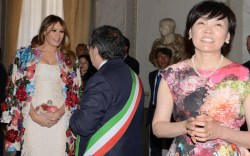 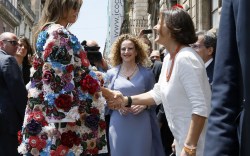 For her arrival in Sicily today, Melania Trump was no shrinking bloom.

The first lady stepped out in an eye-catching head-to-toe Dolce & Gabbana ensemble to rub shoulders with some of the G7 first ladies at Chierici Palace in Catania, Italy.

Bold and festive, the Italian luxury label’s silk 3D floral jacket features an assortment of colors and pretty perennials. The statement-maker retails for $51,500 on Modaoperandi.com.

Melania exited her car with the coat draped around her shoulders while holding a matching clutch. The floral motifs continued on her coordinating dress and pumps — and even on the lining of the jacket — all made of an off-white jacquard material.

The former model towered in the fashion house’s romantic (and bridal-inspired) pointed-toe pumps that featured a soaring stiletto heel.

One half of Dolce & Gabbana’s creative team, Domenico Dolce, hails from Sicily, so it’s an apt ode to what has become one of Melania’s favorite brands — and most vocal supporters.

While on her overseas tour with President Donald Trump, Melania wore the label for a meeting on Tuesday with Pope Francis in Vatican City. She had on a demure black dress and veil, adhering to Vatican protocol.

The label’s co-founder Steffano Gabbana took to Instagram to shower praise on the first lady — his “D&G Woman,” he wrote. And the official Instagram page for Dolce & Gabbana shared five consecutive posts of Melania dressed in the label over two days, directly from the co-founder’s personal account.

Since last week, Melania has been traveling alongside her husband and meeting with world leaders and their spouses during his first overseas trip to Saudi Arabia, Israel, Vatican City, Belgium and Italy.

Along the way, the mother to Barron, one of Donald’s five children, has worn shoes by Christian Louboutin, Manolo Blahnik and Dolce & Gabbana, and dresses from labels such as Ralph Lauren and Michael Kors Collection.

Click through the gallery to view more photos of Melania’s style in Sicily.