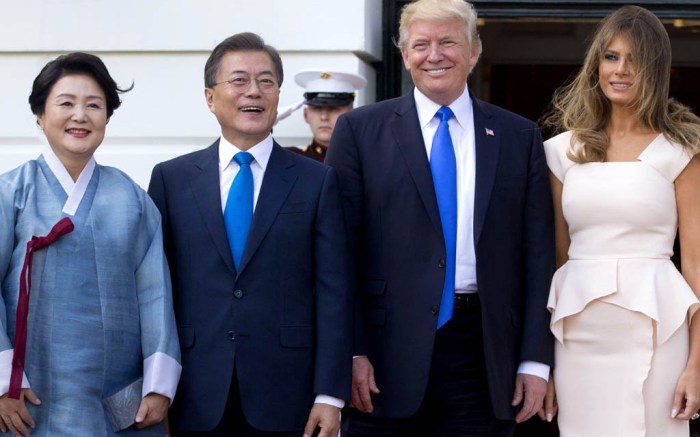 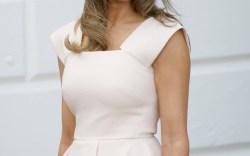 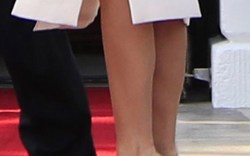 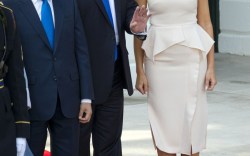 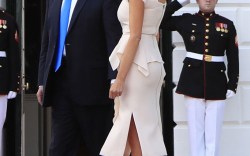 The first lady didn’t let windy weather get in the way of her sartorial choices Thursday while welcoming South Korean Ppresident Moon Jae-in and his wife, Kim Jeong-suk, to the White House.

Mother Nature may have had other ideas in mind, but Melania Trump’s sleek head-to-toe look played well with the weather — in a layered Roland Mouret sheath-style peplum dress teamed with nude pumps by Christian Louboutin.

Melania’s skirt incorporated thigh-high slits around the front and back that billowed in the wind, along with folds of fabric around the waistline. An angular front slit featured ruffles along the hem. The luxury label’s pre-fall blush Sawleigh dress retails for $2,330 on neimanmarcus.com.

The 47-year-old completed the outfit with her go-to heels, Christian Louboutin’s So Kate pumps. The pumps feature a pointed-toe silhouette and a 4.75-inch stiletto heel; they’re available for $675 on nordstrom.com.

The mother to Barron, one of Donald’s five children, participated in several rallies across the country wearing Louboutin’s So Kate style throughout his election bid.

Melania chatted with her counterpart and joined President Trump and the guests for a dinner inside the White House. On Monday, Melania had on Christian Louboutin heels in pink, teamed with a striking yellow dress when she greeted Indian Prime Minister Narendra Modi.