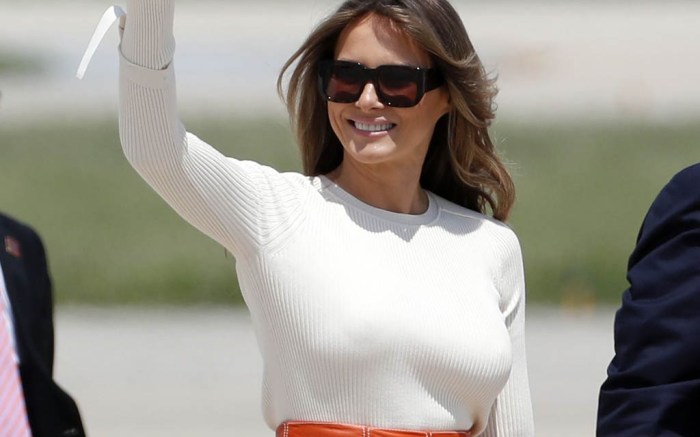 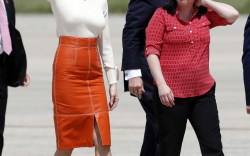 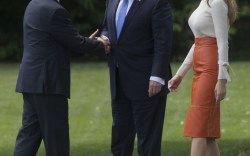 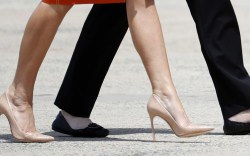 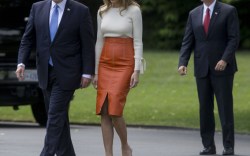 If not executed properly, a long pencil skirt and the wrong color blocking can create a silhouette of less height on your frame. But Melania Trump, a former model, knew exactly what to do with the look.

The first lady soared taller than her 5-foot 11-inch figure in a pair of skyscraper Jimmy Choo pumps today as she made her way to board Air Force One with President Donald Trump on his first overseas trip, with stops scheduled in Saudi Arabia and other countries.

Melania’s nude footwear helped create a body-lengthening illusion without a bold block of color below the skirt’s hemline. The shoes featured a snakeskin upper and a thin stiletto heel.

The color complemented her bright orange Hervé Pierre leather skirt that cut just below the knee. The sleek ensemble was created especially for her, WWD reported. Featuring white contrast stitching and a modest slit up the front, she completed the outfit with a white ribbed Max Mara sweater.

On President Trump’s inauguration day, Melania kicked up her white pointed-toe heels wearing a matching off-the-shoulder Hervé Pierre dress that she collaboratively designed. The sleek number featured asymmetric arc detail, a high slit up the front that flaunted her legs, and a red ribbon around her waist.

“It’s an honor to dress the first lady,” Pierre told WWD in January. “I was actually lucky because over my 20 years in the U.S., I dressed all the first ladies: Mrs. Clinton at Oscar [de la Renta], Mrs. Bush and Mrs. Obama at Carolina Herrera. So I feel lucky and honored to dress Melania Trump, but this time under my name.”

Pierre added that Melania was well-versed in fashion. “She knows what she likes,” he said. “Our conversations were, and are, very easy. She knows about fashion, as a former model. She is aware about constructions, so we have already the same vocabulary when it comes to designing a dress.”