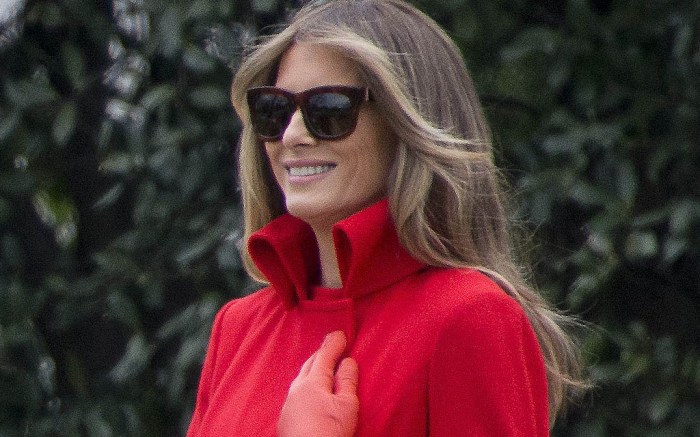 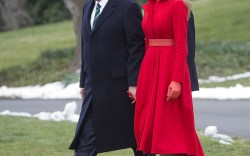 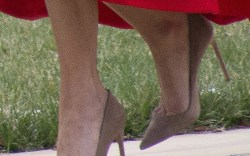 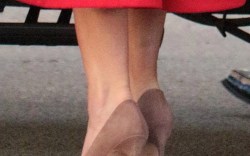 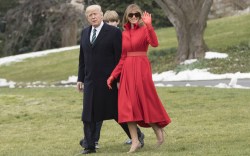 It’s quite the challenge to make a shoe style statement that can compete with eye-catching wearables, but Melania Trump succeeded this weekend where others have struggled.

The first lady stepped out on Friday in a striking, hot red coat dress by Alice Roi that she wisely coordinated with a pair of Manolo Blahnik’s BB pumps for another jaunt with President Donald Trump and son, Barron, to their exclusive club Mar-a-Lago in Palm Beach, Fla.

The former model had on the luxury label’s BB pumps. The footwear is currently available on Barneys.com for $595.

Melania selected the brand’s pointed-toe in a neutral color, which didn’t clash with her loud red coat, but the shoes still made plenty of noise with a sexy 4-inch stiletto heel.

Perhaps her loudest fashion statement of all, however, was with New York City-based Roi’s striking coat dress. Melania has been criticized for not wearing American brands in the past, but she highlighted through her ensemble a nearly 10-year relationship she has had with Roi. In fact, she collaborated with the designer on a black coat for National Prayer Service Saturday at the National Cathedral that she debuted in January.

“She definitely knew what she wanted. She knows clothing well and she’s very direct. She has a wonderful, chic sense of style. That’s something no matter what you put on her she kind of exudes. It’s very guiding for the designer because you know exactly what to do to get in line with her right away,” Roi told WWD in an interview. “She knows what she wants even before she sees it. And it’s always with really, really good taste. That makes it easy because you don’t have to talk somebody out of anything.”

She completed the look with a pair of chic sunglasses and red leather gloves.

Meanwhile, Barron — the youngest of the Trump brood at 10 years old — added a touch of youth to his blazer and trousers with a pair of New Balance sneakers.

The family departed the White House on Air Force One for a getaway to their luxury property President Trump has dubbed the “Southern White House.”