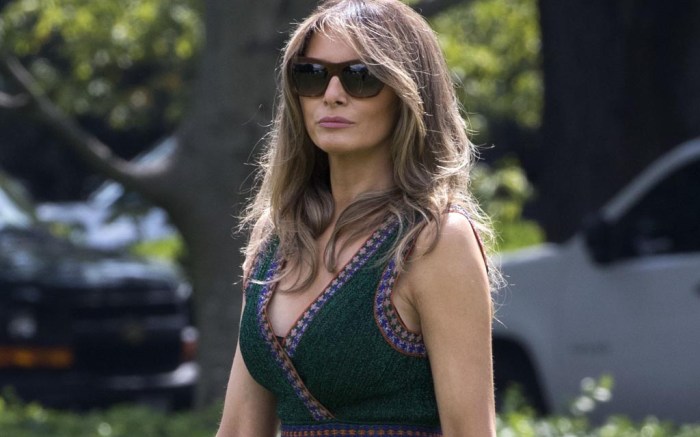 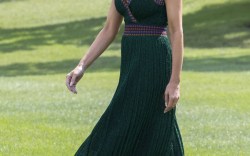 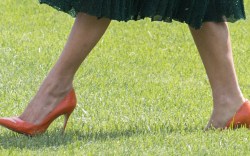 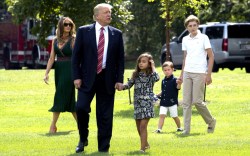 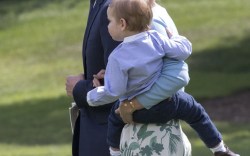 For a jaunt to Camp David, the country retreat of the President, Melania Trump chose a dress that would blend in with her surroundings — but made sure to add a splash of color with her heels.

Set among the wooded hills of Catoctin Mountain Park in Maryland, Camp David is around 62 miles north of the White House. The first lady cut a stylish figure for the trip in a forest green midi dress by Missoni teamed with orange snakeskin pumps.

And the dress comes with plenty of tricks. It features a plunging neckline facing the front that can be reversed to flatter the back and offer a more demure bodice. Melania opted to flatter the front — and diminish the appearance of her waistline. The bodice has a wrap-effect design that nips in the waist with a checked pattern across the waistline in orange and blue.

The dress incorporates a shimmery metallic crochet-knit and pleated skirt. Missoni’s green version is currently sold out, but a similar version in black retails for $1,880 on net-a-porter.com.

The former model and mother to Barron, the youngest of President Donald Trump’s five children, completed the look with a pair of orange pumps with around a 4-inch heel.

Of course, Melania’s affection for Christian Louboutin is well-known, but she also steps out in Manolo Blahnik’s BB pumps.

Barron, 11, was dressed in a white polo, khakis and Gucci’s Kanye loafers.

Melania was accompanied by President Donald Trump, along with his daughter Ivanka Trump, son-in-law Jared Kushner and their children: Arabella Kushner and Joseph Kushner.

Ivanka carried her youngest child, Theodore, while walking alongside Jared. The lifestyle entrepreneur was chic in a blue sweater with billowing pants and a pair of her eponymous brand’s Graffi heels.

The nude pumps feature an ankle-tie wrap closure, a d’Orsay silhouette that reveals the flattering arches of the foot, and a 4-inch block heel.

The shoes regularly retail for $130 but they’re currently on sale for $52 on 6pm.com.

Click through the gallery to see more photos from the Camp David trip.