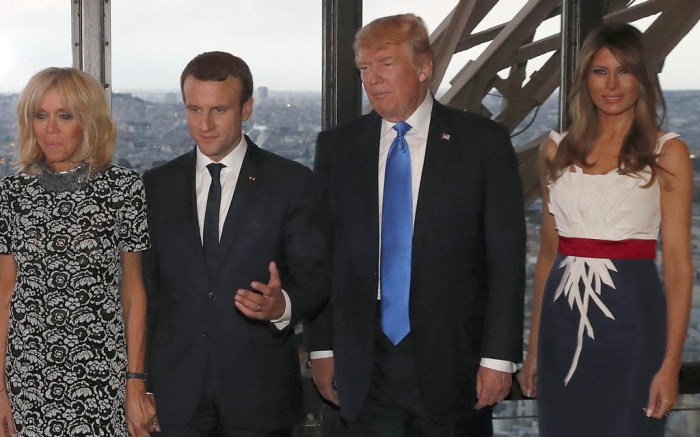 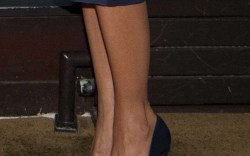 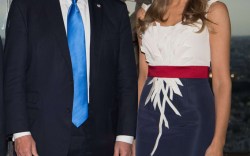 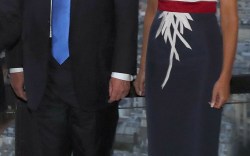 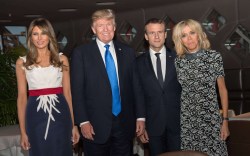 On the eve of Bastille Day, Melania Trump paid a fashionable tribute to France with her latest look.

Stunning in a red, white and blue dress by Hervé Pierre, the first lady joined French President Emmanuel Macron and his wife Brigitte Trogneux today for dinner at the Jules Verne restaurant at the Eiffel Tower in Paris.

The former model’s dress featured a white bodice with striking applique, a red ribbon and blue skirt. For her footwear, she incorporated the same hue as the skirt with a pair of Christian Louboutin pumps.

Louboutin’s So Kate heels are available for $675 on Nordstrom.com. The pumps come in different colors and feature a pointed-toe silhouette on a 4.75-inch heel.

The mother to Barron, one of Donald’s five children, collaborated on a bespoke Hervé Pierre gown when she celebrated President Trump’s inauguration at the Liberty Ball in January.

Speaking to WWD, Pierre said it was an “honor” to dress the first lady.

“I was actually lucky because over my 20 years in the U.S., I dressed all the first ladies: Mrs. Clinton at Oscar [de la Renta], Mrs. Bush and Mrs. Obama at Carolina Herrera. So I feel lucky and honored to dress Melania Trump, but this time under my name.”

Meanwhile, France’s first lady’s style impressed President Trump, who complimented the 64-year-old on her figure. “You know, you’re in such good shape,” he was overheard saying in a Facebook live stream.

Trogneux had on an ornate mini dress with silver embroidery detail that cut just above the knee. She completed the look with a pair of black pumps with silver cap-toes.

Click through the gallery to see more photos of Melania’s style in Paris.