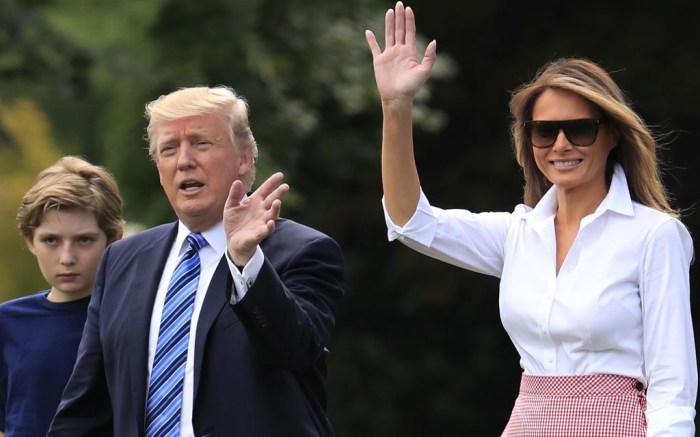 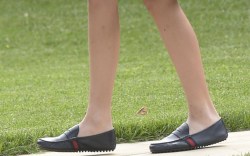 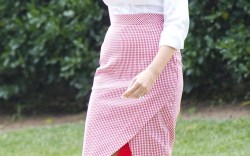 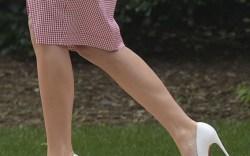 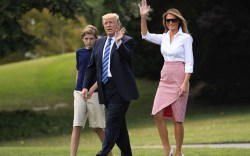 It’s no surprise that Barron Trump has taken some styling cues from his trendy mother, a former runway fixture.

The 11-year-old son of President Donald Trump — whose age is hard to believe given his height nearly matches that of his 6-foot-2-inch father — marched across the White House South Lawn on Friday rocking a pair of sleek, casual shoes that are versatile for any occasion this summer.

Barron teamed Gucci’s black loafer moccasins with khaki shorts and a T-shirt when he joined his parents on Air Force One for a weekend getaway to Trump National Golf Club in Bedminster, N.J.

The youngster, one of Donald’s five children, is currently enjoying a summer break from school, but when he’s headed to class he coordinates his prep school uniform with dark New Balance 574 Core sneakers.

The American-made lifestyle brand’s heritage kicks are available in several colorways and retail for $74.99 on newbalance.com, but Barron’s specific style can be custom-ordered for around $149.

Earlier this month he rocked a statement T-shirt emblazoned with “The Expert” that’s available for $12.99 on etsy.com.

Of course, his father stuck to a formal suit teamed with dress shoes, but the first lady embraced summer style with a chic ensemble.

The former model had on a white button-down top with Altuzarra’s red gingham Wilcox pencil skirt that’s currently on sale for $358 — 60 percent off the retail price on net-a-porter.com.

Melania completed the look with a pair of white Christian Louboutin So Kate pumps. The shoes feature a pointed-toe silhouette and a 4.75-inch stiletto heel; they’re available for $675 on nordstrom.com.