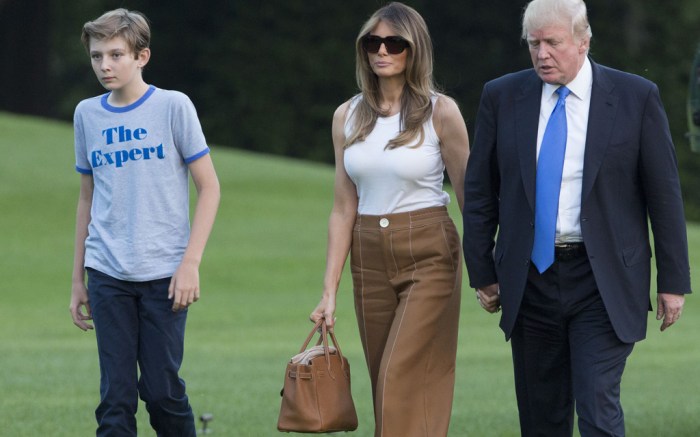 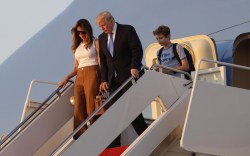 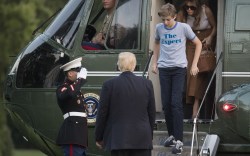 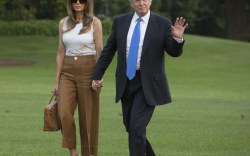 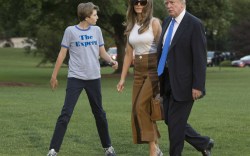 First lady Melania Trump arrived at the White House on Sunday with her and President Donald Trump’s 11-year-old son, Barron.

Melania and Barron were living in the family’s Manhattan apartment until Barron finished this school year. Now the mother and son are officially moving into the White House, and they arrived on Sunday in casual summer style.

Barron wore a T-shirt that read “The Expert,” which he wore with black pants and New Balance sneakers. Melania opted for a white sleeveless top, which she wore with Bally brown wide-leg pants and brown and white striped pumps that she wore during the family’s recent trip to Saudi Arabia. She completed the look with a pricey Hermès Birkin handbag.

Melania has certainly proved she has a love of expensive, high-end clothing and shoes, but it’s certainly nice to see that she’s not above repeating items from her closet that she loves. The first lady owns those pumps in a red and white version, too.

Melania’s parents, Viktor and Amalija, also arrived at the White House with Melania and Barron. It appears they’re just there for a visit and are not expected to move in permanently as Michelle Obama’s mom, Marian Robinson, did during the Obama administration.

Click through the gallery to see more photos of Melania and Barron Trump arriving at the White House.