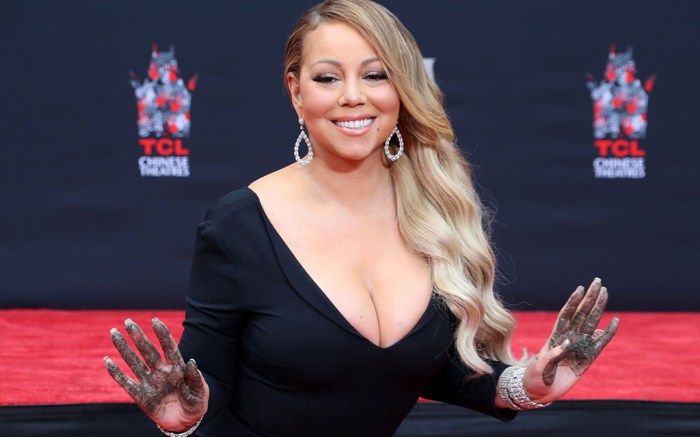 Mariah Carey has joined the official ranks with the elite stars who have cemented their handprints and footprints alongside Hollywood Boulevard.

The 47-yr-old, who boasts five Grammys and more than a dozen No. 1 hits, is now imprinted along the likes of Marilyn Monroe, someone who Carey counts as a source of inspiration. She told Variety, “I have this picture of Marilyn Monroe and Jane Russell when they were doing their imprint ceremony. It’s an iconic photograph, and I have it hanging in my living room.”

“It’s something that feels humbling, and I feel honored by it,” she continued.

For the event, the “Precious” actress wore a plunging black cocktail dress paired with fishnet tights and diamond jewelry. She opted out of imprinting her bare feet, however, dipping her open-toed Christian Louboutin Blakissima black bow sandals ($895) in the cement instead.

“It’s an honor to be here and I hope I can walk in these shoes,” said Carey as she accepted the honor at the ceremony.

Lee Daniels, who directed the Oscar-winning film “Precious,” spoke at the event and praised Carey for her “iconic” aura. “Her heart is gold, her heart is pure, we’ve watched her in the media from the beginning. Her ups, her downs, we’ve lived them, we love her for them,” said Daniels.

See Mariah Carey’s most body-confident styles over the years.