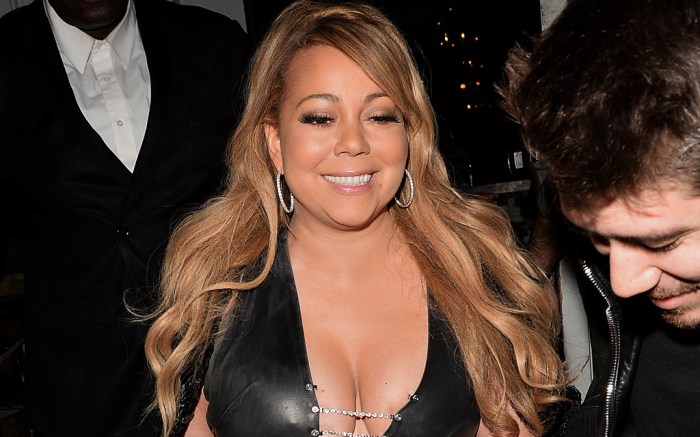 Mariah Carey loves to show off her figure in body-confident looks, but the singer’s outfit for date night with Bryan Tanaka yesterday was particularly racy.

Carey opted for a black leather minidress, held together by two crystal snaps at the bustline, and sky-high black sandals.

While Carey’s dress posed a potential wardrobe malfunction at the bustline, the rest of the dress featured nude paneling, giving the illusion that the singer was nude underneath when, in reality, she was covered up.

Despite being in her late 40s, the Grammy winner is not afraid to show off some skin, and she has sported a series of sensual looks recently, opting for low-cut blouses, form-hugging dresses and thigh-high boots.

As for Carey’s footwear, the 5-foot-8 singer almost always opts for sky-high heels.

The 47-year-old wore towering pumps while bowling with her kids in New York City, climbed to the top of the Empire State Building clad in 5-inch heels, and on a 2002 episode of MTV’s “Cribs,” she infamously used her StairMaster while wearing stilettos.

Click through the gallery to see more of Carey’s most daring looks.

You Won’t Believe the Absurd High Heels Mariah CareyBowled in