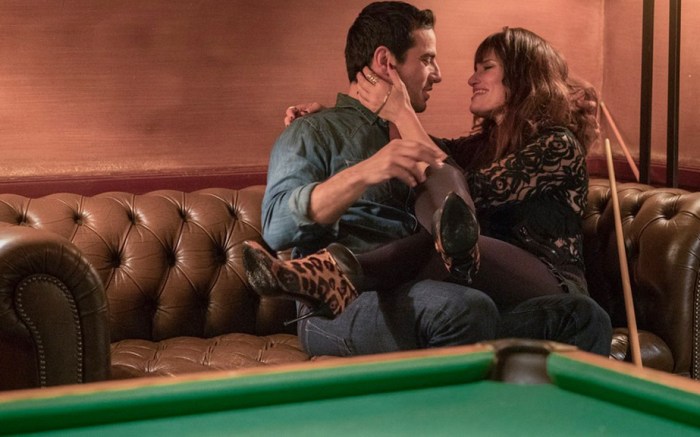 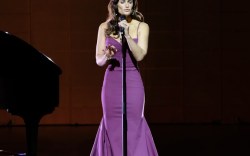 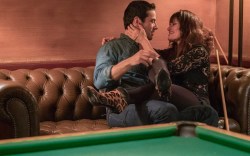 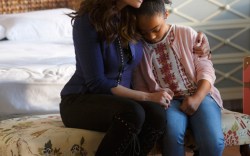 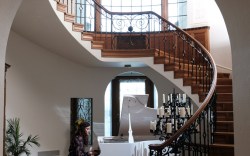 Big hair and even bigger fashion statements from 1988’s “Beaches” are just as memorable as that big voice from the movie’s star Bette Midler singing its anthem, “Wind Beneath My Wings.”

“They asked me not to do that kind of stuff,” costume director Rhona Meyers tells Footwear News of Midler’s ’80s style in an interview. “They wanted it stylish and updated — not huge nods, just little nods.”

The network’s film debuted Saturday (an encore airs Sunday at 8 p.m. ET), and the time line picks up where its predecessor left off, in the late 1980s. It follows the decades-long friendship between spitfire entertainer CC (Menzel) and well-groomed lawyer Hillary (Long) — beginning with their blissful encounter as children on a beach (cue “Glory of Love”).

They form an unlikely bond at the beginning with differences obvious from head to toe; CC in a wild outfit with multicolor animal print sneakers, against Hillary’s summer dress and formal black shoes. “Animal print was supposed to be a theme,” Meyer said, “but I don’t know if we did enough of it. It was a flamboyant thing and a nod to Bette Midler’s CC.”

Their relationship dynamics get more complicated in their adult lives. Jealousy, tears and boots are abounding.

“The most exciting scene for me was the one where they were doing their walk-and-talk,” Meyers said of her favorite style. “Both ladies were at the pinnacle of who they were, and their strengths showed who they were through their costumes. [Menzel] was wearing burgundy Gucci boots with a floral long dress and leather jacket, and [Long] was wearing a taupe sweater with chains and a horsey lady blouse. Her shoes might have been Fendi. For me that was the strongest costume because they were both like, ‘This is who we are and we are so different.’ ”

Footwear News: How did your wardrobe help the storytelling?
Rohna Meyer: “Idina, instead of making her more like Bette, which was ‘80s flamboyant kind of a bit over the top, we did that style, but kept her edgy, more rock ‘n’ roll. In a way she didn’t know who she was but wanted to be someone. We made her Madonna and Gwen Stefani, and we gave her a look of the artist she emulated until she came into her own and had her own style, but obviously she had money later and looked much richer.

“For Hillary, she comes from money and Ivy League schools. She was a country-club lady — the bows on her clothes were almost like she’s a gift … that she was a gift to men. We kept her [wardrobe colors] muted because CC was the standout.”

FN: What were some of the footwear brands used during the production?
RM: “For CC we did Fendi, Givenchy, Dolce, Gucci. Most of her high-heel boots were Gucci. And we used Alexander Wang, Sergio Rossi, Zanotti. Christian Lacroix and Louboutin. Her animal print boots were Fendi. She had on Zara boots in the nursery (scene); her star boots when she was younger — those were Jeffrey Campbell.”

FN: What can you share about the look in the final scene where Idina Menzel dons a bold purple dress and carries metallic heels in her hand?
RM: “We tried on a lot of dresses for the final scene, and that one was amazing on her (Zac Posen). It just felt strong. But for that scene the [Jimmy Choo] shoes were just part of the outfit instead of starting it. Usually the jacket or the shoes is what I build an outfit around, but the dress was amazing on her.”

FN: The film framed a lot of the shoes quite well, which is rare. Did you plan for that?
RM: “When I start pulling, I either go to the shoes or a leather jacket or coat to give them a character — so, basically, TV people say don’t do that. I can not, not spend money on the shoes because the shoes tell me who the characters are. We were lucky that this movie allows the shoes to be seen.”

FN: What can you share about CC’s leopard-print booties she wore on a date scene? The camera zoomed in and focused on the shoes.
RM: “That [shot] was decided afterward because [Menzel] liked the leopard print. She liked everything.”