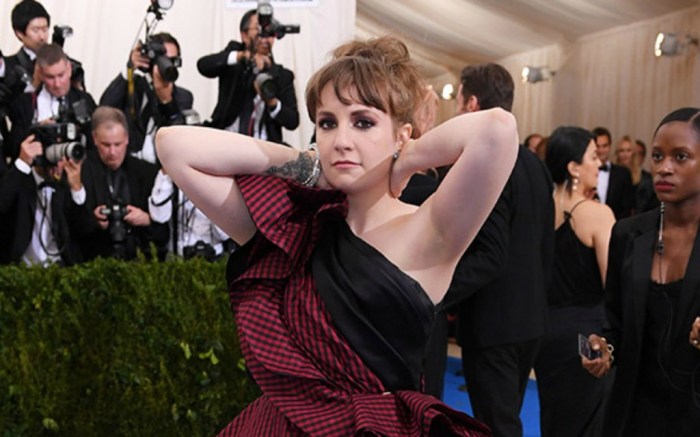 Lena Dunham is many things, but predictable isn’t one of them. You never know what she’s going to bring to the the red carpet. Most recently it was Fenty Puma x Rihanna satin bow sneakers at the “‘My Art” film premiere paired with a sundress. And at last year’s Met Gala, Manus x Machina: Fashion in an Age of Technology exhibition, the “Girls” actress donned a J. Crew tuxedo.

This year, for #MetKawakubo, Dunham stepped out wearing a gingham-printed, off-the-shoulder dress with a full skirt by designer Elizabeth Kennedy. But what really has us kvelling about her look tonight is the fact that she’s wearing affordable Jeffrey Campbell boots under her custom dress. Very high-low. Very Costume Institute Ball.

The star’s stylist Christina Ehrilch took to Instagram to post a picture of the back of Dunham’s dress for the night; captioning the photo, “When GINGHAM meets GIRLS.”

The actress has been known to wear totally affordable styles from the likes of Topshop, Nasty Gal and Ann Taylor Loft.

Lena Dunham’s Heels Aren’t as Expensive as They Look