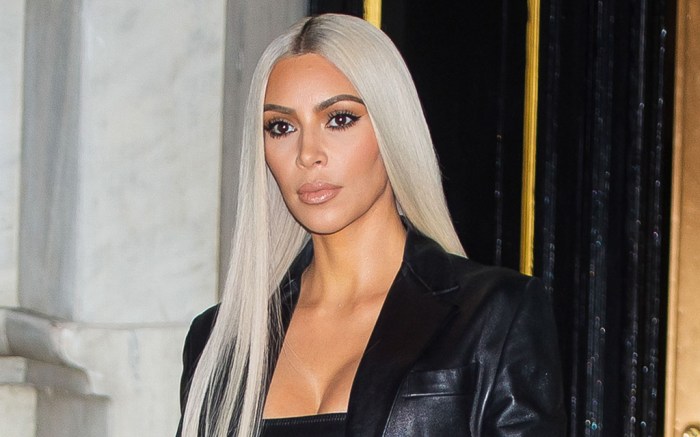 The fresh color has not, however, changed the reality star’s style sensibility: Kardashian stepped out to a NYFW event yesterday in her see-through Yeezy mules, which she paired with a leather blazer, a bandeau and sheer tights — choosing not to wear pants.

The reality star’s black underwear was fully visible through her tights, and while Kardashian has already worn other provocative looks during fashion week, including a slashed-through Tom Ford for Gucci dress, this look was her most daring so far.

While the 36-year-old likes the clear shoe trend in general, this particular pair of mules has been a go-to of hers both on and off the red carpet, and she’s paired them with everything from a sparkly Balmain skirt to velvet, dark blue pants.

Kardashian’s pantless look was particularly racy, but the “Keeping Up With the Kardashians” star went for a subtler look earlier in the day, wearing a low-cut, silver Versace gown to the Harper’s Bazaar Icons party.

Click through the gallery to see Kim Kardashian’s most body-confident styles.