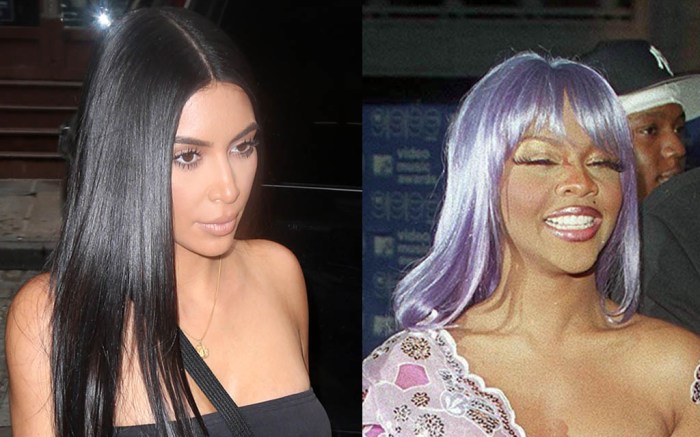 Thigh-high boots are a staple in Kim Kardashian West‘s closet — just ask her daughter, North, who has been known to sneak around and try on her mirrored Balenciaga pair. Naturally, she managed to incorporate it into her latest shoot for CR Fashion Book‘s 1999-themed issue.

The star paid homage to ’90s icon Lil’ Kim in the 11th edition of the magazine, which officially hits stands Sept. 7. West took on the rapper’s mermaid-themed head-to-toe purple look that included a pasty on her chest from the 1999 MTV Video Music Awards. Petra Collins was the mastermind behind transporting the “Keeping Up With the Kardashians” star back in time, and to do so, Kardashian donned a standout ensemble that captured the throwback moment in a new way.

Kardashian wore a velvet pink Baserange bikini set, a fur coat and of course the highest thigh-high boots. Though it’s hard to miss her blond wig featuring blush pink highlights, the 36-year-old’s mind-blowing boots pushed the look over the edge. Her one-of-a-kind shoes had an intricate rare python print and an eye-catching sharp toe paired with the famous red sole. The Italian-made snakeskin boots also showed off Kardashian’s legs with their 4.75-inch heels. The shoes are currently sold out on bergdorfgoodman.com.

If this doesn’t immediately grab your attention, we don’t know what else will.

Click through the gallery to see Kim Kardashian West’s most body-confident styles over the years.

How Kim Kardashian, Beyoncé and Other Celeb Moms Are Matching With Their Kids in Style