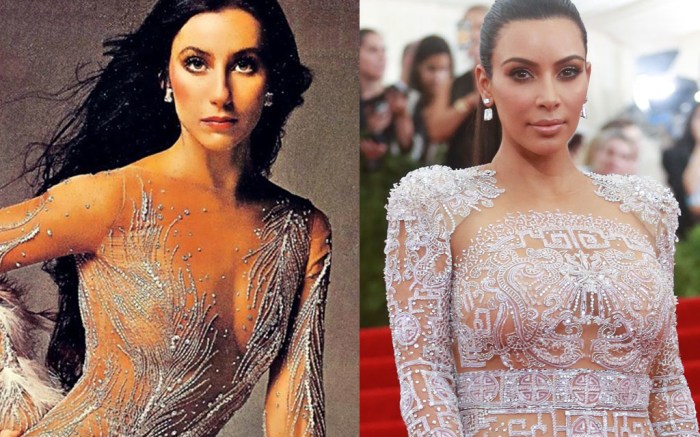 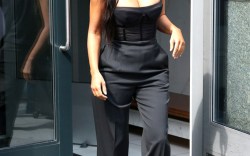 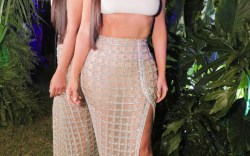 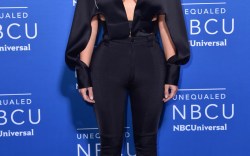 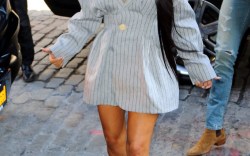 It’s no secret Kim Kardashian West is inspired by Cher. Whether it be posted on Instagram or portrayed quite literally on the red carpet, the reality star has continuously stated that the iconic singer is one of her biggest style influences.

Most recently, Kardashian West covered Harper’s Bazaar Arabia’s September issue channeling Cher. The similarities between the two in the photo are uncanny. The dramatic lashes, the comparable poses and outfits — including a Bob Mackie vintage dress — all made her appear nearly identical to Cher. But it all comes down to the hair. Kardashian West donned Cher’s signature jet-black, straight and excessively long hair for the photo shoot and has been doing so more recently.

“She’s always had the sickest style. I’m obsessed with her,” Kardashian West said in the interview. “To think that she was wearing these sheer dresses in the ’70s and just what people must have thought back then.”

Cher’s over-the-top fashion statements skyrocketed her to notoriety in the ’60s and ’70s — so we can see why Kardashian West would take inspiration from the fellow Armenian and famed singer and actress.

“The thing about Cher is she can be [any ethnicity],” Mackie told FN. “Everybody looked like they were Swedish with a turned-up nose, blond hair and blue eyes. There were millions of women out there who saw Cher and thought, ‘She’s like me.’”

Mackie continued, “It never occurred to me that the costumes would become iconic. I worked week to week, and it was always like trying to top myself, especially with her. Her costumes became part the entertainment value of the show. People would tune in to see what she would wear and what bit of skin she would show next.”

Kardashian West has certainly nailed Cher’s trademark style. Check out all the times she’s channeled Cher in the gallery below.