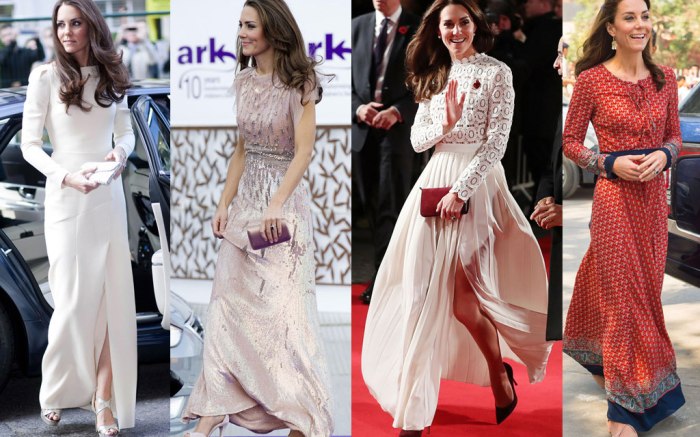 Nearly six years ago, the now-Duchess of Cambridge was simply Kate Middleton. She went to parties in London and ran her own errands about town. Not yet a princess, she could wear just about anything she wanted.

But on April 29, 2011, Middleton became the Duchess of Cambridge when she married the Duke of Cambridge (Prince William) in a lavish London wedding. Since then, she’s honed her style, both conforming to royal fashion expectations and pushing the boundaries when the occasion allows for it.

For formal occasions, Middleton looks to shoe designers including L.K. Bennett, Gianvito Rossi and Rupert Sanderson for appropriate pumps and sandals in an array of neutral colors.

A favorite casual style of Middleton’s is her espadrille wedges by Monsoon, which she’s worn for several occasions.

This year, Middleton surprised many when she wore sandals by Brazilian brand Schutz. She paired the label’s light pink sandals with a white off-the-shoulder dress.

During a royal trip to Canada in the fall, Middleton mixed high fashion with high-street. She wore a pair of striking red Russell & Bromley pumps with her Alexander McQueen dress during a visit to Vancouver. Later in the trip she also wore relatively affordable pairs by J. Crew and Superga.

With plenty of royal engagements to come this year, Middleton is sure to continue to impress with her fashion choices.

Click through the gallery to see Middleton’s 35 best shoe looks.