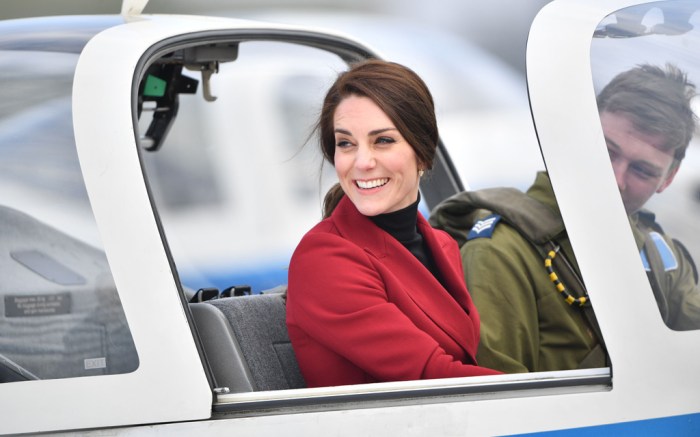 On Tuesday, Kate Middleton was back to a casual look after dressing up in an Alexander McQueen gown for the BAFTAs in London on Sunday.

For a visit to the Royal Air Force Wittering, Middleton paired her red Philosophy di Lorenzo Serafini blazer and black pants with a pair of Russell & Bromley knee-high boots. The black suede boots with a stretch panel are a collaboration with Stuart Weitzman, inspired by the designer’s popular 5050 boot. The boots retail for £395, or about $493 at the current exchange rate. The Duchess of Cambridge’s boots are relatively affordable compared to her blazer, which retails for $1,515.

During her visit, Middleton got to sit in one of the Royal Air Force’s planes, and she also did some training exercises with the young Air Cadets.

On Monday, Kensington Palace announced that the duchess and her husband Prince William will go on an official visit to Paris from March 17-18.

The Duke and Duchess of Cambridge will undertake an official two-day visit to Paris on 17th and 18th March.

Click through the gallery to see more of Middleton’s best shoe looks.