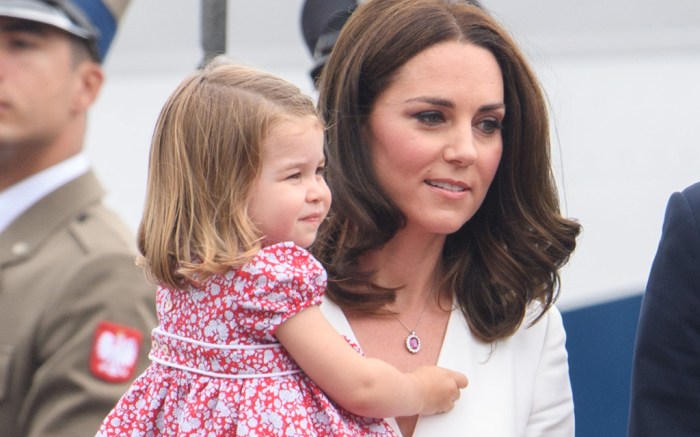 The Duchess of Cambridge arrived in Warsaw, Poland, today with husband Prince William and their two children, Prince George and Princess Charlotte. Middleton recently wore the designer pumps for her sister Pippa’s wedding in May with an Alexander McQueen blush dress. In Poland, she also opted for an Alexander McQueen look — this time a white peplum dress that featured a lower neckline, similar to the one on the Marchesa dress she wore for last week’s state dinner. She kept her accessories minimal with a ruby necklace and earrings, and a silver watch.

On Sunday, Middleton also wore a white dress to watch Roger Federer win his eighth Wimbledon title in London. That look was a bit more casual — her Catherine Walker & Co. dress featured a smattering of flowers around the skirt.

After their visit to Poland, the royals will head to Germany. Prince George and Princess Charlotte are mostly expected to stay in the care of their nanny and will make appearances as the family departs Poland and arrives in Germany.

Click through the gallery to see more of Kate Middleton’s best shoe looks.