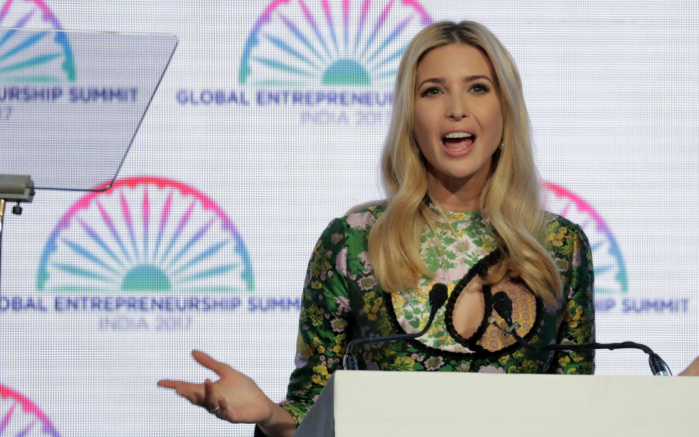 During a year of memorable moments, Ivanka Trump made some serious style statements.

Since her father took office in January, the first daughter, 36, has appeared in a number of eye-catching looks from designers such as Oscar de la Renta, Miu Miu and Dolce & Gabbana.

And the senior presidential adviser’s ensembles are always completed with fashionable footwear. When she’s not wearing styles from her own eponymous label, Trump slips into everything from Zara mules to Stuart Weitzman sandals.

Just a few days ago, the businesswoman shared a playful snapshot on Instagram. Posing with her youngest son Theodore, Trump donned a silk gown from Prada’s fall ’17 collection paired with pink velvet sandals featuring a jeweled buckle from the luxury brand.

In September, the designer rocked a grey wool pantsuit from Escada complete with lacy blue crystal-embellished Dolce and Gabbana kitten heels during a visit with Queen Maxima of the Netherlands.

Throughout the summer months, a frock that stood out from the rest was a red floral Carolina Herrera dress with a peplum hem that she wore during a meeting in the Roosevelt Room of the White House. She completed the look with Nudistsong ankle-strap sandals from Stuart Weitzman.

Back in January, on the day before Donald Trump was sworn in, the “Women Who Work” author made waves in two chic ensembles from Oscar de la Renta. First, she wore an emerald green dress and matching coat before attending the pre-inauguration dinner in a bow-embellished black and white gown.

For more of Ivanka’s best style statements over the past year, check out the gallery.