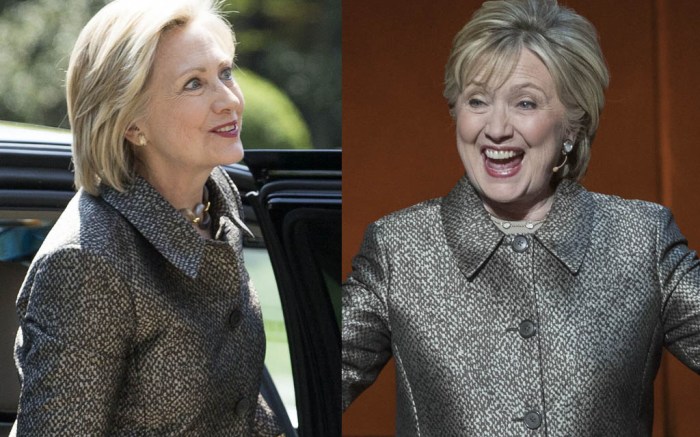 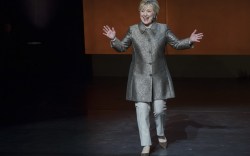 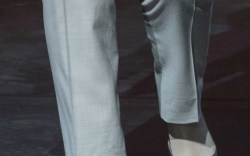 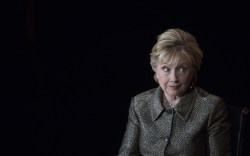 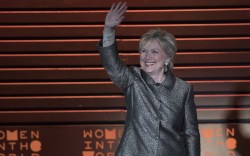 For her first major post-election interview, Hillary Clinton stuck with her favorite styles.

The former Democratic presidential nominee participated in a chat today in New York City at the Women in the World Summit, where she discussed Syrian President Bashar al-Assad, the election, Russia and misogyny, among other topics.

And she made a loud fashion statement with a metallic jacket teamed with gray trousers and dark brown pumps.

Clinton wore the jacket in 2015 at the Hillary Rodham Clinton Awards for Advancing Women in Peace & Security at Georgetown University. She completed that look with a pair of patent leather pumps and black pants.

Some of her favorite shoe brands throughout her campaign bid included Chloé and Salvatore Ferragamo; silhouettes included kitten heels and flats.

The former Secretary of State was introduced by Comedy Central’s “Full Frontal” host, Samantha Bee. She was interviewed by The New York Times‘ Nicholas Kristof, during which  Clinton urged Donald Trump’s administration to take action to prevent deaths related to chemical weapons attacks in Syria.

Click through the gallery to see more photos from the Women in the World interview.

Watch the full speech video below:

Hillary Clinton Was Well-Heeled for the First Presidential Debate