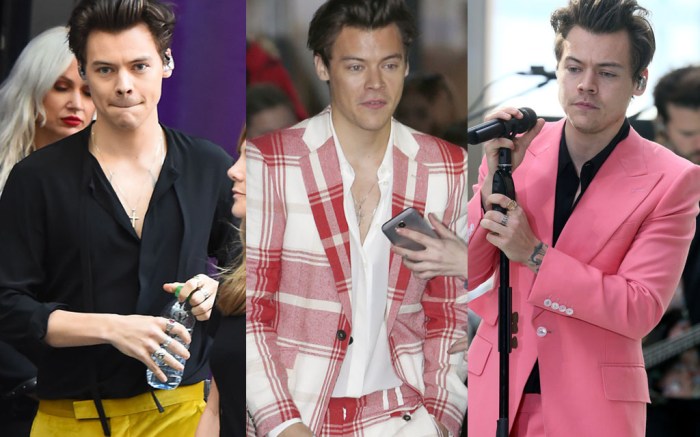 The making of a rock star starts with the right kind of shoes — just look to Harry Styles and the striking style statements he’s been making lately.

When he greeted fans on Friday in London and performed on the BBC One Show, he stepped out in a spectacular ensemble that included a black V-neck dress shirt and flared yellow trousers that gave just a peek of his bespoke black Ripon boots by Roker with a chunky heel. Slicked-black voluminous hair completed the glam look.

Thank you @thestmagazine and @_charlesjeffrey @harry_lambert. Harry is wearing the bespoke JASB boot. ・・・ Repost: This Sunday, @harrystyles gives his first ever solo, broadsheet interview to The Sunday Times Magazine with accompanying, exclusive portrait images shot by @maryamccartney To get a printed copy of this week’s magazine, pick up a copy at your nearest news retailer from Sunday. We also have a very limited number available to buy through the Amazon store which can be shipped internationally as well as to the Uk . . . . . . Styling by @harry_lambert Grooming by @louteasdale .Harry wears a bespoke suit and waistcoat by @_charlesjeffrey and @rokeratelier boots. . . . . . . . . . #harrystyles #harry #loveharry #signofthetimes #sweetcreature #onedirection #harrystlesimagine #onedirectionimages #onedirectionforever #onedirectionfacts #marymccartney #musicphotography #boyband #heartthrob #mensfashion #thesundaytimes #thesundaytimesmagazine #portraitphotography #instagram

The musician donned Roker’s Jasb boot style for a big interview and pictorial that will debut on Sunday in The Sunday Times Magazine wearing dramatic pinstripe trousers with a matching blazer and no shirt. In April, he performed in Roker’s Ripon boot on the “Graham Norton Show” wearing flared trousers that had embroidered details.

Styles’ performance on Friday was one of three sleek wardrobe changes he made while on a media blitz promoting his new music.

@harrystyles wearing the ROKER Ripon boot made #bespoke. Worn on the @thegrahamnortonshow last night. #handcrafted in our atelier in London. #harrystyles

For sound checks at the BBC One Show he had on a champagne bomber jacket, jeans and camel-colored almond-toe boots that had a high heel. During a performance at BBC Radio 1 Studios he had on loafers with a nearly 2.5-inch heel that he teamed with a red-and-white striped suit.

Earlier in May, wore a pink suit with loafers when he performed on the “Today Show.”

The former lead crooner of the boy band One Direction is carving out a career and image of his own since signing a solo contract with Columbia Records in June last year.

Speaking to Footwear News in a previous interview, psychologist Zelana Montminy, Psy.D., shared that a change in someone’s appearance while taking on a new venture is a nonverbal cue that he or she is communicating to an audience. “It’s like holding up a sign,” Montminy said.

“When someone alters their appearance, when they are engaging in a new position, it signifies that they want to be seen in a different way,” Montminy explained. “They are trying to shift the perception of the public. … Physical change is a cue or signal to the outer world or to yourself that things are different about you.”